After several years, I recently finished processing the Smithey & Boynton, Architects & Engineers Records, Ms1992-027. Partner in the firm, Kenneth L. Motley purchased the firm in 1992 and donated their historical records in 1992 and 1994. About 30% of the collection was made available before I arrived at Virginia Tech in 2014, but the oversize, rolled architectural drawings and blueprints were not (although I must thank my predecessors for labeling and locating the rolls, which helped me significantly). Over the past four years, I arranged, described, and boxed up nearly 1,500 project drawings, totaling over 220 cubic feet and including over 920 boxes. (This isn’t even the largest collection we have in Special Collections!)

Louis Phillipe Smithey and Henry B. Boynton formed the Smithey & Boynton partnership in 1935. Smithey & Boynton built and renovated thousands of buildings throughout the state of Virginia. They designed Lane Stadium and several other buildings on the Virginia Tech campus, buildings for the Norfolk & Southern Railway (now Norfolk Southern), and the Lyric Theatre and Armory Building in Blacksburg. The firm became best known for building public schools, even using the same basic layout for numerous schools. They had nearly 150 school design commissions from 1945 through 1953 in at least 19 counties and 10 cities in Virginia.

Drawings of the Armory Building in Blacksburg, designed by Smithey & Boynton:

Smithey graduated from Randolph-Macon College in 1910, before attending both Virginia Polytechnic Institute and Massachusetts Institute of Technology. He was an engineer for Virginia Bridge & Iron Company from 1916 to 1920. He then opened his own practice, before partnering with Matthews H. Tardy, as Smithey & Tardy from 1922 through 1932. Smithey again had his own practice, occasionally working with Henry B. Boynton, before they partnered as Smithey & Boynton in 1935. Smithey was a registered architect in Virginia and West Virginia, a fellow of the American Institute of Architects (AIA), and served as president of the Virginia chapter of the AIA in 1940. He also served in the U.S. Army during World War I and World War II. Smithey married Dorothy Terrill in 1938, and they had one daughter.

Photos and drawings of the Lyric Theatre in Blacksburg, designed by the firm of Louis Phillipe Smithey:

Boynton graduated from Virginia Polytechnic Institute in 1923, before taking classes at the University of Illinois (now the University of Illinois in Urbana-Champaign). He worked for Carneal & Johnston, Architects & Engineers, from 1924 to 1928. (We previously wrote about Carneal & Johnston on this blog in “A New Collection and a New Look at Virginia Tech’s Architectural Style.”) Boynton joined Smithey’s practice in 1929, becoming a partner in Smithey & Boynton in 1935. He was a registered architect in Virginia, West Virginia, North Carolina, and Pennsylvania; held several positions of the Virginia chapter of the AIA; and served as the Governor’s appointee to the State Registration Board for Architects, Professional Engineers, and Land Surveyors from 1962 to 1972. Boynton also served on the VPI Alumni Board of Directors from 1969 to 1979 and the VPI Education Foundation, Inc.’s board from 1978 to 1982. He also served in the Army Corps of Engineers during the World War II. (Special Collections also has the Henry B. Boynton Papers, Ms1992-002, which include some records from Smithey & Boynton.)

For more, I recommend reading “Smithey and Boynton and the Designing of Virginias Modern Architecture” by Mike Walker, which is about Smithey & Boynton’s work and includes photographs of some of their buildings, primarily in Covington, Virginia.

We talk a lot about items and collections in Special Collections having stories to tell. Sometimes, those stories are full of clear details, exciting new surprises, and a creator about whom we can discover quite a bit. Other times, well, you might get a more interesting mix. The kind that results in some on-going, Scooby-Doo-style sleuthing. Like this letter!

This is a relatively new accession and it isn’t even processed yet (consider this a sneak-peek!). But, it caught my attention as I was thinking back through some recent acquisitions in search of a subject, probably because it has some mystery elements to it. Written November 6, 1864 from Weldon Railroad (just south of Petersburg), Virginia, it’s simply addressed to “Friend William.” We don’t have the original envelope, so we don’t know William’s last name or where he lived at the time. However, based on the contents of the letter, we might guess that William is from Brookfield, NY. One of the other reasons this letter jumped out at me was the first page:

The writer started his letter, finished four pages, and still had more to say. In a time when paper was often scarce (and in other times and places when letters were paid for by the recipient and cost by the page), “cross-hatching” was a common occurrence. Not done writing? Go back to the first page, turn it 90 degrees, and keep going! (That should be totally easy to read, right??) Case in point, this letter actually isn’t as bad as some others. I’ve seen examples done in different colors or in pencil or ink that has faded over time. I was actually able to transcribe the majority of the text (and I’ll be going back to work on those and other missing words down the road). Weldon Railroad was located just south of Petersburg, which was a hotbed of activity during the last 6 months of the Civil War. The 189th Regiment, New York Infantry, the regiment with which the writer served, was newly formed in October 1864, and soldiers in it would spend the majority their service around Petersburg:

By now, you may have noticed that I keep saying “the writer.” And with good reason. At the very end of the cross-hatching, in the upper-right corner of the first/last page, the letter simply reads “write as soon as you get this Raz.” Raz. That’s what we have to go on for the author. However, most archivists love a challenge, myself included. While identifying the writer is an on-going challenge, a cursory glance at a roster of the 189th New York Infantry actually gives us a couple of prospective Raz-es: Riley (Rila) Razey and Warren Razey. Raz seems a likely nickname among friends, though there’s still plenty of research to be done.

Here are scans of all the pages:

For a letter that, on the surface, looked like it would be hard to read and lacking in solid information due to its mysterious correspondents, Raz has proved me wrong. His 4+ pages cover a bit of the usual: the weather here is pleasant, you should write more, today is dull, here’s how all our mutual friends in my unit are doing. But he also has some interesting details and insights. On the second page, he writes:

the army moved last week and
tried to take the south side railroad but
through some mistake one Corps did not
move as thay were ordered and it proved a
failure. so thay called it a Reconnaisence
and came back to camp. I think we shall
try it again soon.

Railroads were always coveted property during the war, but soldiers don’t always write so frankly about mishaps. Given that this is a more recently formed regiment, it’s mix of new soldiers and those who have been fighting for a while. Raz notes:”I think we have had a good time but some of the boys think it hard. but thay will see their mistake before the year is up.” Shortly after that, he adds:

I suppose
thay are having great times about Electhion
ant thay. well we have something else to think
of down here it dont interest one much
it will make but little difference who is
president the ware will go on no mater who
is president

One wonders if Raz would have a different view of the war in one, three, or six months’ time. Perhaps if we can figure out who he is, we can figure out some of his post-war life, too. When we process the collection, we’ll try to post an update with new information! In the meantime, you’re welcome to view the letter in person or look at the images online and challenge yourself to read more of Raz’s handwriting.

Today I finished up the first phases of work on a great collection of Civil War correspondence. The collection includes 19 letters by 18 different authors. Unless there’s a connection (usually family, business/organization, institutional, or something along those lines), we tend to name and organize collections based on the creators. So, under “normal” conditions, if such a thing exists (one of our favorite phrases in the archives world is “it depends”), these letters might have ended up as 17 collections (two of the letter writers are brothers). These 19 letters, though, have something else in common: location. Each was written in or around Alexandria and Fairfax counties in Virginia. And each was written within the first 16 months of the Civil War. As a result of that, we’ve decided to treat them as a single, cohesive unit. This group of letters offers a unique perspective on the early experiences of Union and Confederate soldiers around Washington DC in the early months of the war. There are number of common elements: regiments cutting down trees to build up defenses, skirmishes between forces, the need for food and clothes from home, and a frequent hope that soldiers “hope to be home soon.”

You can see the finding aid for the Alexandria and Fairfax Counties [Virginia] Civil War Correspondence (Ms2013-029) online here. The contents list of the finding aid includes links to the digitized letters and, when available, the transcripts. You can also go straight to Omeka (our emerging digital content platform) and see the letters and transcripts here. The digital images all have links back to the finding aid, as well. The idea is that we’re creating online connections to help our researchers move back and forth from digitized primary sources to context for those materials easily. 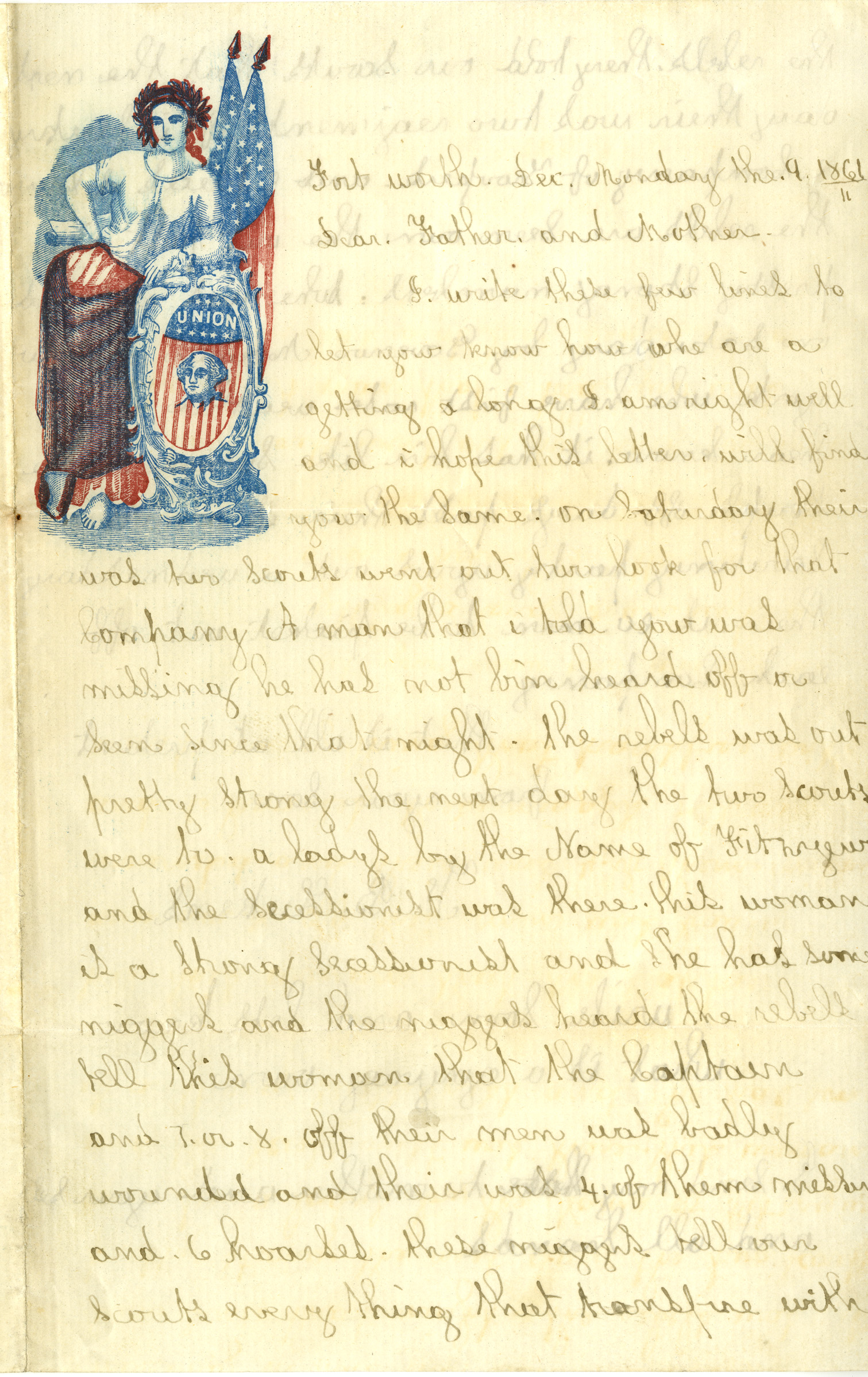 This collection remains a work-in-progress, as we expect new materials from the donor in 2014 and into the future. As new materials arrive, we’ll continue digitize them and update the finding aid. We’ll be able to offer new insight into early war-time conditions and experiences as the collection continues to grow.

The Alexandria and Fairfax Counties [Virginia] Civil War Correspondence (Ms2013-029) is not the first collection we’ve placed in Omeka (https://omeka.lib.vt.edu/), nor is it the first one we’ve digitized, but it’s the first one to go through acquisition, digitization, processing, and addition to the web in sequence and within a short period of time. We hope it will help us create and shape our workflow for the future as we digitize more collections. It may not be a speedy process, so we also hope you’ll bear with us as we create new material to share. We promise, it’ll be worth it.