After a year and a half without student workers onsite due to the pandemic, SCUA finally has a number of students in the department working on a variety of projects! I’m fortunate right now to supervise a couple of them on a number of processing projects in our different collecting areas, including the University Archives, Local/Regional History and Appalachian South, and the American Civil War, among others.

The Records of the Virginia Tech Dean of Students, Henry J. Holtzclaw, RG 8/2a, pertain to the work of Holtzclaw, who was the first person to serve as Dean of Students (also called Dean of Men) at VPI from 1923 to 1924. The collection is predominantly of correspondence between Holtzclaw and others at the university, such as President Julian Burruss, the Athletics Director C.P. Miles, and many other well known names from this time period.

The collection shows the intricacy and detail to which the Dean was involved in the everyday operations of the university. Holtzclaw helped develop the timetable and schedule of classes as well as the annual catalog. He oversaw the students’ attendance, handling requests for resigning from the university and their discipline in relation to hazing, poor grades, and rules violations. Dean Holtzclaw was also involved with the student organizations. One item of particular interest relates an incident when the Corps of Cadets was called to help put out a fire in town.

The Theodore Winthrop Papers, Ms2021-004, contains items by and about Winthrop, who has the distinction of being the first Union officer killed in the American Civil War. Winthrop served on the staff of General Benjamin Butler, when he was killed at the Battle of Big Bethel in Virginia on June 10, 1861.

While only one item, the Virginia Tax Receipt, Ms2021-009, is a unique document from 1859 as it identifies a freedman’s tax payments for Peter Logan of Chesterfield, Virginia. Looking through the records on Ancestry.com, Peter Logan (ca. 1810-1880) is a Black shoemaker from Chesterfield County, Virginia.

The Blacksburg Lions Club Records, Ms2021-022, document the work of the local Lions Club, primarily their charitable work with eye and ear diseases. We also received a number of music books, mostly men’s choral music and a couple Lions Club books, which will be added to the Rare Book Collection.

Some other collections recently processed:

Virginia Tech’s history is a complicated one that is much more presumed than known due to an early 20th century blaze. In its early years, the institution served as an allegory of the rough, rag-tag, Appalachian spirit we see still embodied through a beaten-up lunch pail at football games and the largely blue-collar valley that envelops us. Tech, unlike its sister institutions William and Mary and the University of Virginia, has never owned any enslaved people by circumstance of its post-antebellum founding in 1872. Even its predecessor institution, the Olin & Preston Institute, has no record of owning any. That is not to say, however, that the grand 2,600-acre Blacksburg campus has never met or benefited from the harsh legacy of slavery.

Prior to last year, you most likely would not see him listed on the Virginia Tech Black History Timeline. He predates Charles “Uncle Sporty” Owens, Floyd Meade, and even Odd Fellows Hall, all well-known black figures in early Virginia Tech history. If you had the privilege of crawling around the campus of Virginia Agricultural and Mechanical College about 148 years ago with Addison Caldwell and other “rats,” you’d most likely refer to him as “Uncle Andrew.” He is Andrew Oliver, and he is the first known African-American worker at what is now Virginia Polytechnic Institute and State University.

END_OF_DOCUMENT_TOKEN_TO_BE_REPLACED

One of our many roles in Special Collections is to shed light upon hidden histories, uncovering communities that are traditionally marginalized or forgotten by time. The long history of African-Americans in Appalachia, for example, has traditionally been overlooked. Through the communities of New Town, Wake Forest, and Nellies Cave (among others), Montgomery County has a particularly rich legacy to explore. We work with historians, genealogists, community members, and other institutions to document and preserve these stories for future generations.

Newman Library currently hosts New Town: Across the Color Line, an exhibit documenting a predominantly African-American community that bordered the Virginia Tech campus until the late 20th century. Developed by the Virginia Tech Public History program, the exhibit includes items from the Blacksburg Odd Fellows Records (Ms1988-009) held by Special Collections. The exhibit will be open from October 5 through November 20. 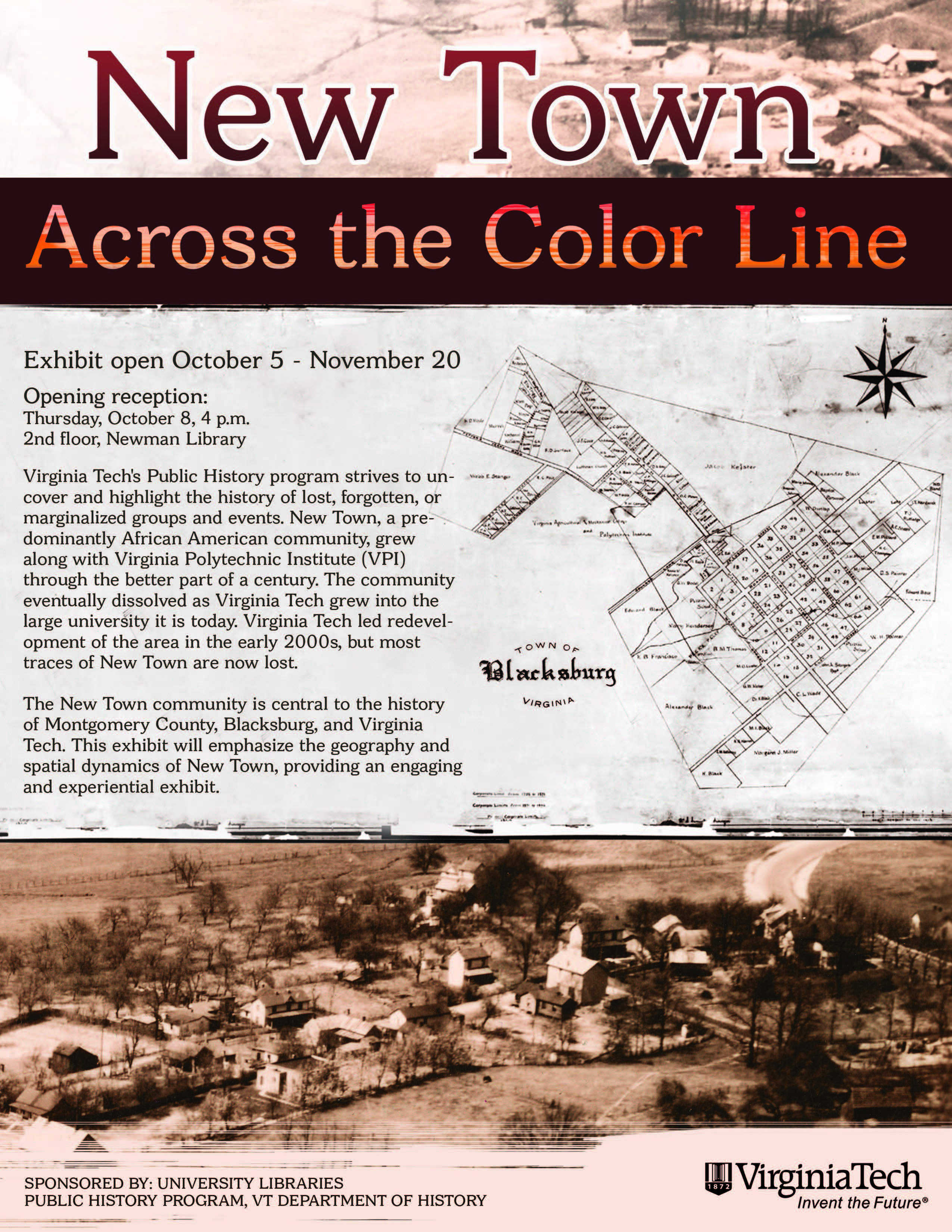 The Odd Fellows Records help document an important African-American civic institution in early 20th century Blacksburg. Researchers interested in the experiences of African-Americans in Montgomery County and greater Appalachia can find many other resources in Special Collections.Manuscript collections, photographs, oral history interviews, and rare books provide insight into the experiences of African-American communities from antebellum times through the present day. The Christiansburg Industrial Institute Historical Documents (Ms1991-033) represent a collaboration between the Christiansburg Industrial Institute Alumni Association and Special Collections to document the prestigious institutionthat educated generations of Virginia students from the 1860sthrough school integration.

Another collection, entitled Hidden History: The Black Experience in the Roanoke Valley Cassette Tapes and Transcripts (Ms1992-049), includes approximately forty-six interviews with African-American residents of Roanoke, Virginia about the cultural, social, and political history of their community. The research papers of historian and community activist Richard Dickenson (Richard B. Dickenson Papers, Ms2011-043) include a wealth of information about local African-American history, including the free communities of antebellum Montgomery County and the many civic institutions of Christiansburg. The John Nicolay Papers, (Ms1987-027) include research files and oral histories that provide insight into churches, local institutions, and the historic African-American community of Wake Forest.

These collections represent a small fraction of the primary sources and publications that document African-American history in Special Collections. More importantly, these resources point to an abundant history still waiting to be uncovered.

In a video interview on March 12, 2013, Beatrice Freeman Walker talked about growing up in Blacksburg during segregation, the changes she has observed in the town, and the historical significance of the St. Luke and Odd Fellows Hall. Mrs. Walker, who died on December 31, 2013, was a dynamic community member and cared deeply about the preservation of Blacksburgs African American history.

Born in 1926, the youngest of five siblings, Mrs. Walker grew up in Blacksburg at 202 Jackson Street. Her familys property went all the way to Progress Street where her father, Alonzo Freeman, had his dry cleaning business. Their home was on the border of the towns original grid of 16 blocks, which was laid out by William Black in 1797 and bounded by Draper Road, Jackson Street, Wharton Street, and Clay Street. In the 1970s, the town acquired her family home though eminent domain in order to expand the fire department, and she lived the remainder of her life in Christiansburg.

In the interview she recalled that when she was growing up, the children were unconscious of segregation. There were blacks on one side of the street and whites lived on the other. The problem, she said, It isnt the children. Its the parents.

At various times, her family also owned a beauty salon, an ice cream parlor where they served homemade hand-cranked ice cream, and a recreation place called Paradise View on what was then Grissom Lane, but is now called Nellys Cave. Daddy just owned it because we had croquet, horseshoe, badminton, bands, and sandwiches and sodas, she said. They would go up there for recreation. It was open on Saturdays and Sundays. People as far as Bluefield, West Virginia would come in and down there.

Among other jobs, Bessie (Briggs) Freeman, Mrs. Walkers mother, traveled in order to encourage membership in the St. Luke and Odd Fellows. This organization was important to the African American community because it helped people find opportunities for learning different trades and it sold insurance that people could borrow from when they wanted to send a child to college or when there was a death. The St. Luke and Odd Fellows Hall, built in the early 1900s, provided a gathering place for meetings, social events, and fundraisers.

After graduating from Christiansburg Institute in 1943, Mrs. Walker did civil service work in Washington, D.C. Later, she returned to Blacksburg and worked for several local businesses including Spudnuts (later called Carol Lee Doughnut Shop) on College Avenue, Litton Poly-Scientific, and in 1975, Volvo White Motor Company in Dublin, Virginia. While at Volvo, she was active in the United Auto Workers (Local 2069) and a strong advocate for her fellow employees.

Beatrice Freeman Walker was instrumental in the renovation of the Order of St. Lukes and Odd Fellows Museum Hall in Blacksburg. In 2004, Mrs. Walker, Walter Lewis, and Aubrey Mills were appointed as trustees.

Beatrice Freeman Walkers video oral history interview, which was conducted at the St.Luke and Odd Fellows Hall, may be accessed from Virginia Techs institutional repository, VTechWorks, managed by the University Libraries at http://vtechworks.lib.vt.edu/handle/10919/24714 Mrs. Walkers granddaughter, Latanya Walker, was present at the interview conducted by Tamara Kennelly. Scott Pennington was the videographer.

To learn more about the St. Luke and Odd Fellows Hall visit http://www.blacksburg.gov/index.aspx?page=73