R. Buckminster Fuller. This name is probably familiar to most people in the United States. It conjures images of futuristic domed cities of the type typical to a mid-20th century vision of the future.

Richard Buckminster Fuller, also called Bucky, was a celebrity. He was an engineer, an architect, a veteran, an environmentalist, a philosopher, and a poet. He was a celebrity because of these things rather than in spite of them. He was born July 12, 1895 in Milton, Massachusetts. He went to Harvard University for two years but did not finish. He later went to the United States Naval Academy (1917). He was an officer in the United States Navy during World War I.

For me, Fuller is a legendary figure. I grew up with cultural references to “bucky” balls, images of domed cities in speculative fiction, and knowing conceptually about the structure of fullerenes. So, when I was wandering through the archives looking for something to post about this week, I was excited to see a box labeled “R. Buckminster Fuller Collection 1949-1978” (Ms1975-007). Opening it up was like opening a present.

Our collection includes one folder of correspondence from and to Fuller, three folders containing copies of things Fuller wrote, six folders of things written about Fuller, and two oversized folders containing some rather large items within those categories. Looking through the materials, they aren’t like what most people expect to find in an archives. They aren’t handwritten. They aren’t really old. They aren’t deteriorating. They’re just extremely fascinating.

The letters are from November 1953 – December 1962. Most are from Fuller’s time working on his business Geodesics, Inc. They are typed. They are unsigned. Yet, for a fan of his work, they are exhilarating to read. The first one I laid eyes on was written while Fuller was with the Department of Architecture at the University of Minnesota. As if these being Fuller’s own words wasn’t enough, a connection to Minnesota biases me in favor of something from the start.

In the letter, Fuller is telling Tyler Rogers of Owens-Corning Fiberglas Co. about the challenges and modifications of his designs that have been necessary because of a lack of the necessary facilities to safely employ fiberglas in their construction. The letter is a finely crafted plea for assistance from this fiberglas manufacturer, and, according to a note added at the end, the plea was successful leading Owens-Corning to supply all the fiberglas used in the project to construct Fuller’s dome.

Take a look. Maybe you’ll find it as fascinating as I do: 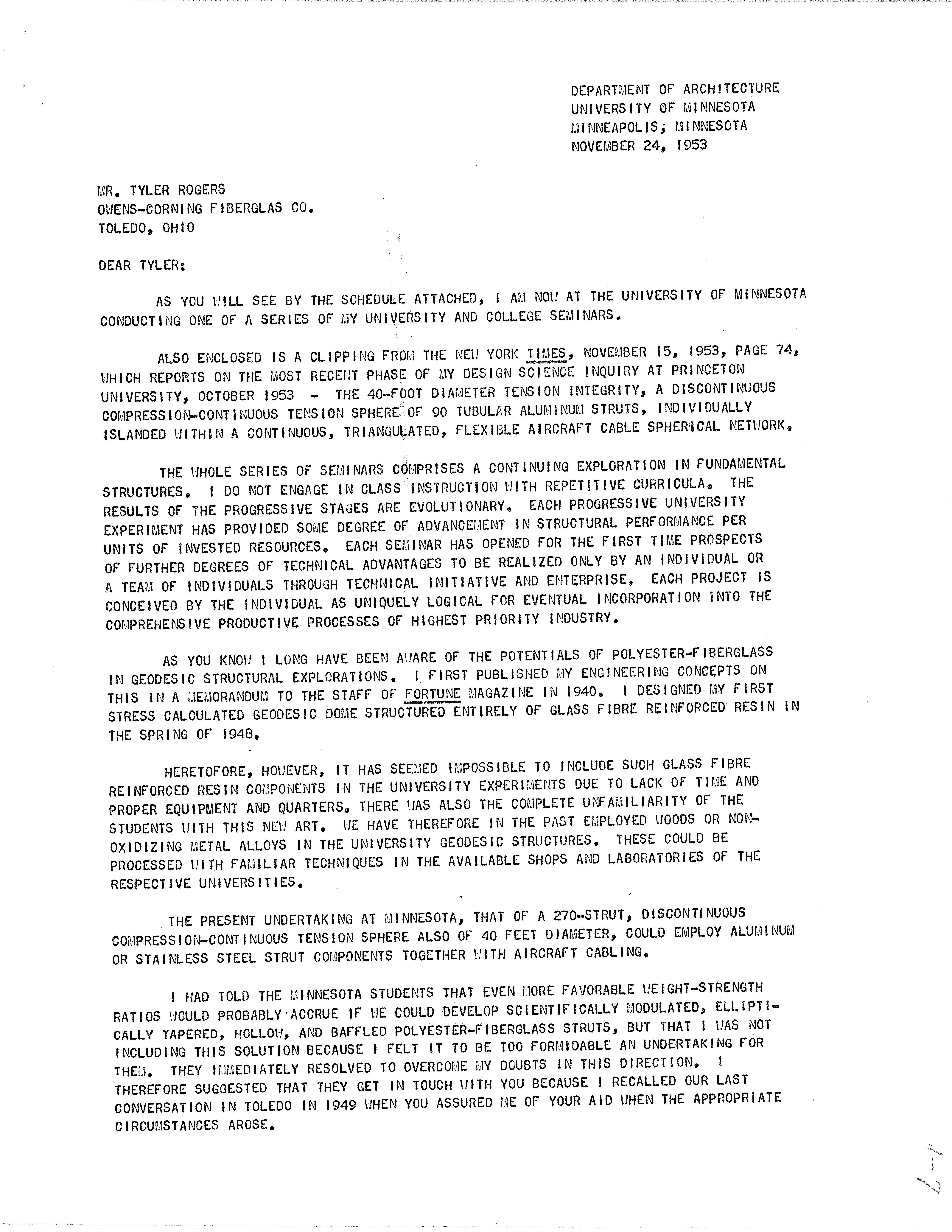 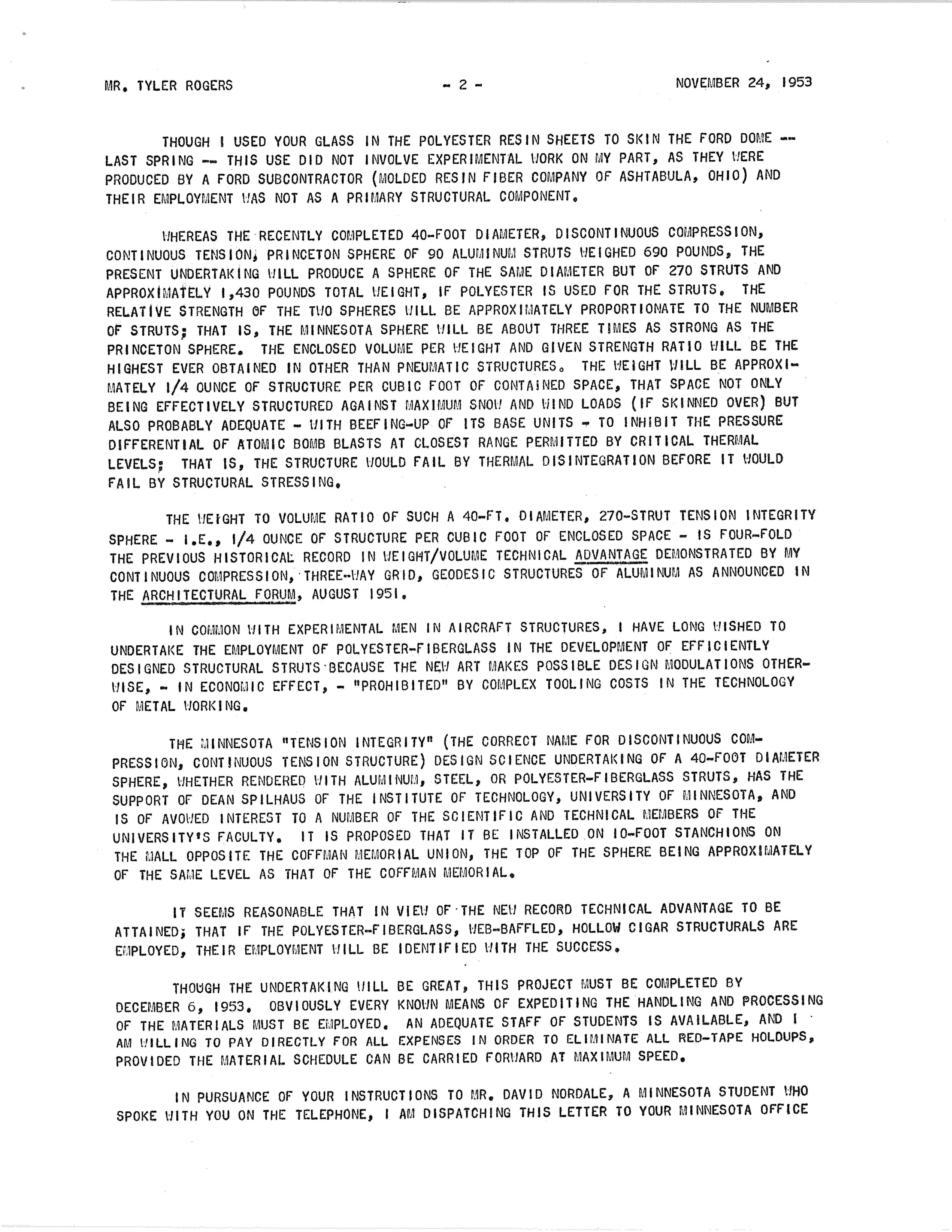 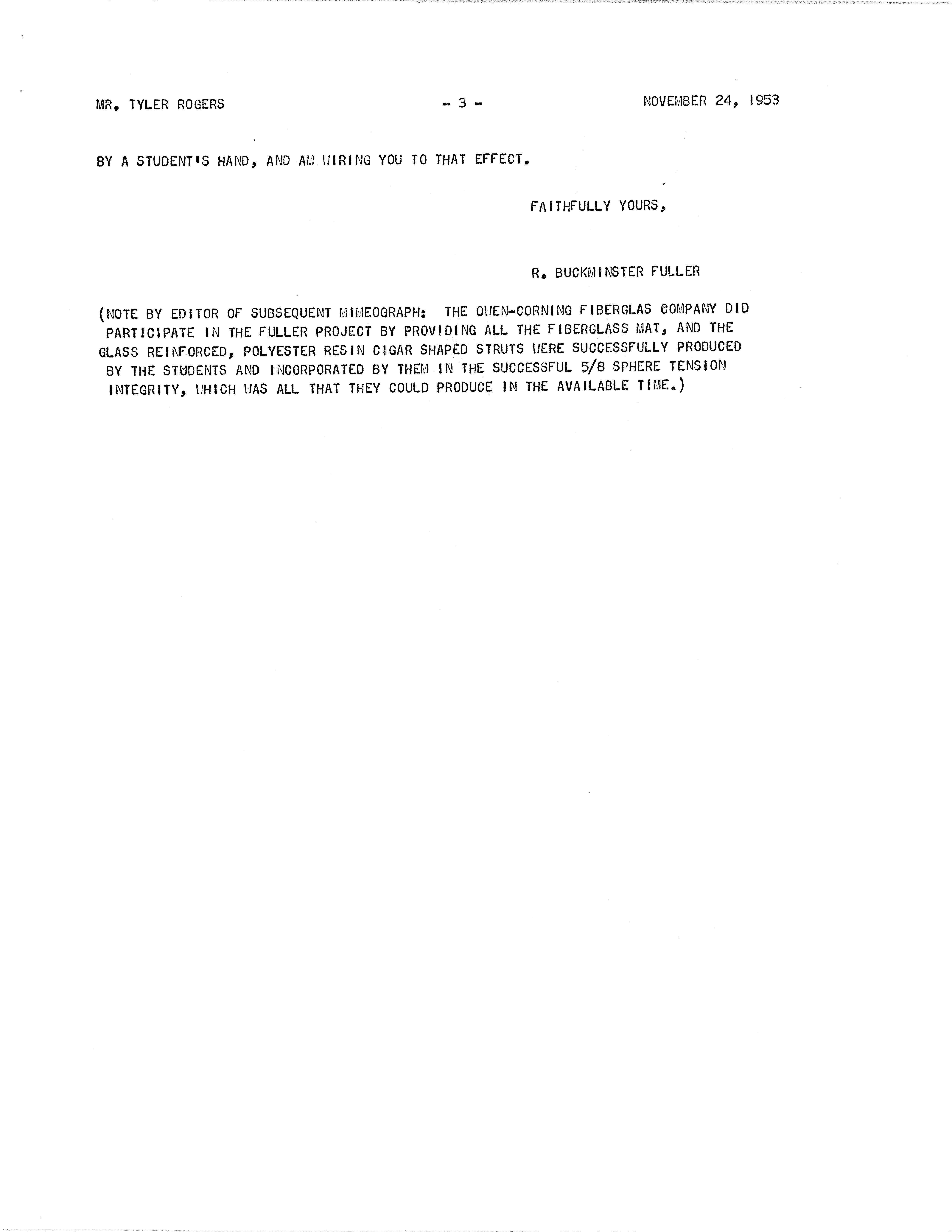 Digging further into the materials, even just glancing, I learned much more about this mythic figure from my childhood. Had he been alive today, I am confident Fuller would have been viewed as an activist. His engineering ideas were rooted in his conception of the need for humanity to work together to support itself. He felt that domes could solve world housing problems. He also felt that industrialization had led the world to war and that as long as income inequality was creating “energy slaves” we would inevitably progress into further wars. Dipping into our small collection yields evidence of these views quite quickly.

The above illustration hints at Fuller’s environmentalism and highlights his concern for housing the population of the Earth. It reads:

26% of Earth’s surface is dry land
85% of all Earth’s dry land is here shown
86% of all dry land shown is above equator
The whole of the human family could stand on Bermuda
All crowded into England they would have 750 sq feet each
“United we stand, divided we fall” is correct mentaly and spiritualy but falacious physicaly or materialy
2,000,000,000 new homes will be required in next 80 years

An example of his analysis of the world’s energy economy and its effect on the incidence of world conflict appears on the same folded sheet: 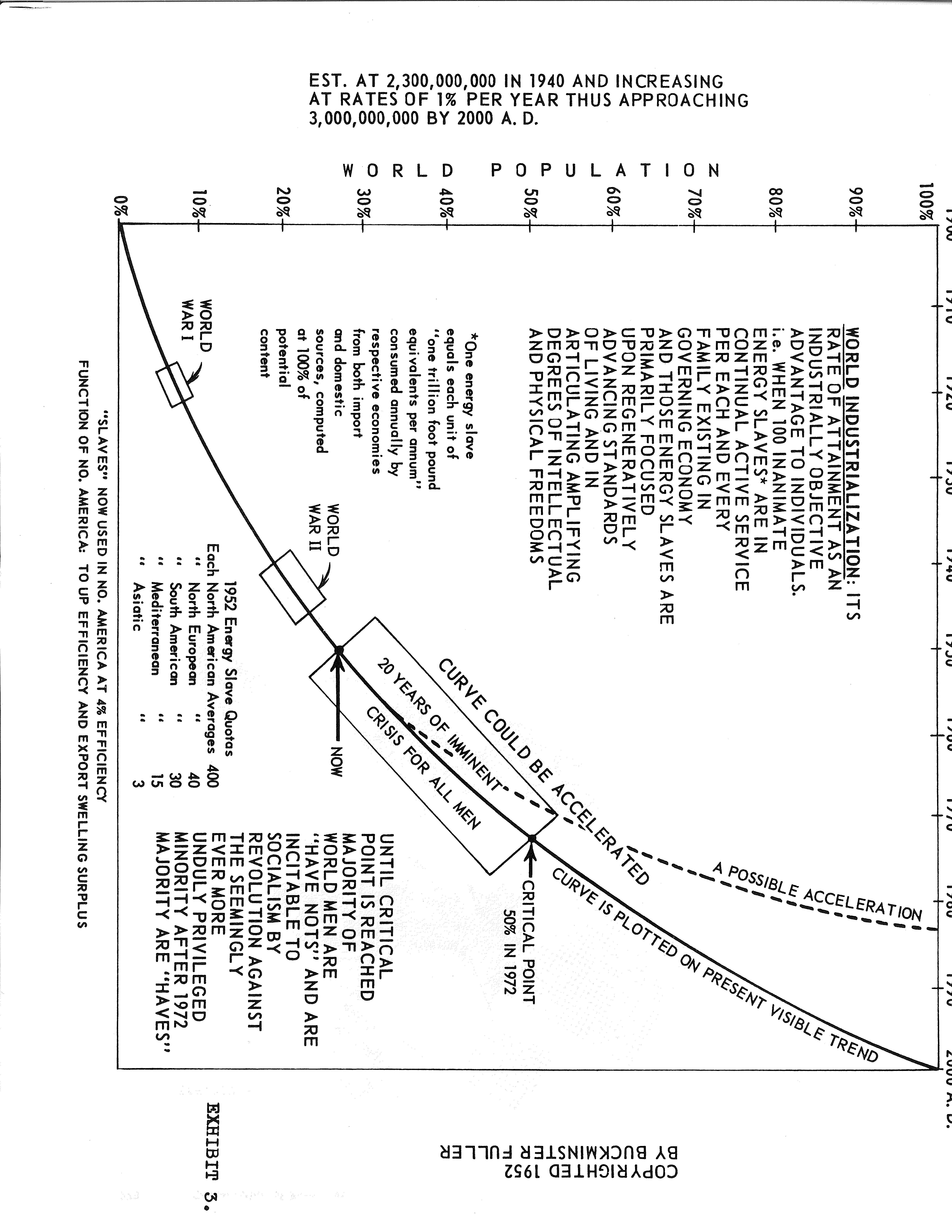 This graphic is from 1952 and is titled “The Twentieth Century.” His analysis reads:

World Industrialization: Its rate of attainment as an industrially objective advantage to individuals. i.e. When 100 inanimate energy slaves* are in continual active service per each and every family existing in governing economy and those energy slaves are primarily focused upon regeneratively advancing standards of living and in articulating amplifying degrees of intellectual and physical freedoms until critical point is reached majority of world men are “have nots” and are incitable to socialism by revolution against the seemingly ever more unduly privileged minority after 1972 majority are “haves”.
* One energy slave equals each unit of “one trillion foot pound equivalents per annum” consumed annually by respective economies from both import and domestic sources, computed at 100% of potential content

Overall, it’s an interesting plot. His analysis, while raising the specter of Communism as villain (typical of the early 1950s), shows global instability and a trend toward possible conflict through 1972. That tipping point is supposedly when most people in the world will go from being “have nots” to being “haves”. His predictions may or may not have been accurate (I’ll leave the correlative analysis up to you) but they certainly are interesting.

The last thing I’ll share is a portion of something I found somewhat interesting from among Fuller’s writings. Most of his writings in our collection are reprints of articles he had published. From a publishing standpoint, I find them interesting because of how they are printed. They are self-contained. In the case of the one I will share, an entire page describing articles in the publication is present but the only one that is printed with full clarity is the one by Fuller – the others have been “blurred” via the addition of slight pixilation of the ink in the printing process. I have yet to actually read this article, so I won’t go into depth. I also won’t share the entire thing here because I really don’t want to make the publication if came from mad at me. Also, just to be clear, I’m reading it for the article (I mean, really, that’s all that’s even here!).