Sometimes, despite all of the proactive efforts we make in Special Collections to find new and interesting collections to add to our holdings, some of the best materials just fall right into our laps, thanks to the thoughtfulness of generous donors. Such is the case with the Joseph P. and Margaret James Collection, which was donated to us earlier this year by VT alumna Denise Hurd (sociology, 74). Though relatively small in size (approximately half a cubic foot), the collection relates notably to two of our focus areas (the Civil War and Appalachia) and touches on at least two others (culinary history and agriculture). The collection had been handed down from Hurds father, Festus Burrell James, and relates to the James family of Braxton County, West Virginia.

At the heart of the James collection are six Civil War-era letters to Margaret James from her husband Joseph P. James, who enlisted in Company L of the 14th Virginia Cavalry on October 4, 1862. Just 10 weeks later, Joseph was captured, and the first of his letters to Margaret was written from Camp Chase, Ohio, on January 28, 1863. In the letter, Joseph recounts his journey in captivity from Braxton County to Camp Chase and advises Margaret to move in with his father.

Margaret did move to her father-in-laws home, and her reply to Joseph provides a word from the war-time home front of northwestern Virginia (todays West Virginia). Dated March 14, 1853 [sic], Margarets brief letter shares news from Josephs family and neighbors. Having left her home, she hints at the hazards for a young mother living alone in contested territory during wartime (i havent Ben at home Since the first of febuary … but am going hom if i can get enybody to stay with me) and brings the absent father up to date on his childrens growth and behavior (Luther … is a bad boy. he swears yet[.] little vany can run just where he pleases. he is as fat as a little pig).

Joseph was exchanged and released in April, 1863. According to his service record, he transferred to Company I, 17th Virginia Cavalry while still a prisoner, and he must have immediately joined his new regiment; by May 10, Joseph was near Salem, Virginia, from which he wrote Margaret another letter. He discusses the Jones-Imboden Raid into northwestern Virginia, then mentions three acquaintances who were sent to Montgomery White Sulphur Springs to convalesce. Always present in Joseph’s letters are his love for his family and his desire to return home. He mentions sending a lock of hair to Margaret and receiving locks from her and their sons, a common practice at the time (see our blogpost of October 30, 2014, The Hairy, Scary Things That Time Forgot!).

By that autumn, poor health had forced Joseph to fall behind his company and miss the opportunity to return to Braxton County with his comrades. The route being too hazardous to travel alone, Joseph instead recuperated in Mercer County, and he wrote Margaret from there on November 5 and 25. Josephs final war-time letter was written from Red Sulphur Springs in Monroe County, West Virginia on April 15, 1864. In this letter, Joseph dispels rumors that he had been captured by the enemy or imprisoned as a deserter. He admits having been absent without leave, then boasts of the lenient punishment given him. It is Josephs lengthiest letter, and he goes into detail about what the men are eating and the religious services in which theyre participating. Six months later, Joseph would again be reported absent without leave, and in the final weeks of the war, he was listed as a deserter. Josephs letters give us today a brief but valuable glimpse into the life of a soldier whose service was spent almost entirely in southwestern Virginia. 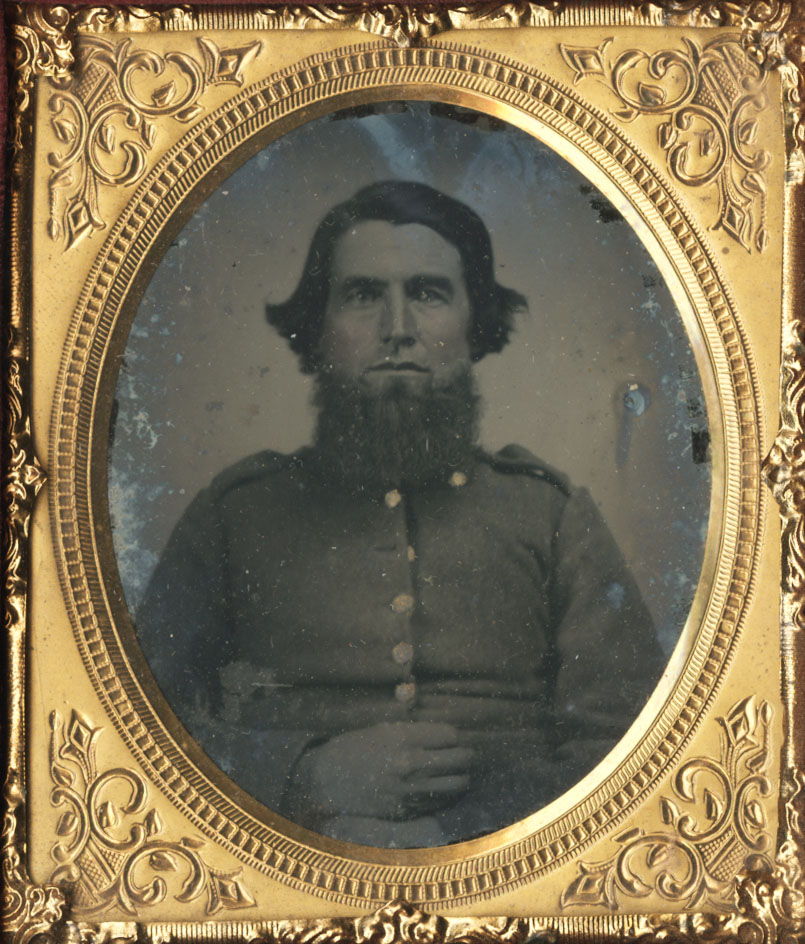 The James Collection extends well beyond the Civil War, however. From the end of the war until his death in 1889, Joseph James maintained a series of memorandum books to record information that he deemed significant. Nearly every 19th-century farmer seems to have kept account books, detailing farm, business, and personal financial transactions, and we hold many pocket-sized ledgers in Special Collections. Joseph’s books are a bit unusual, though, in that they frequently contain other items of interest. One book contains notes on a trial for the murder of Jemima Green, a case on which Joseph served as a juror. Elsewhere, one might find records from Joseph’s work as a mail carrier, quotes from Bible scripture, notes on deaths in the family and neighborhood, and recipes for home remedies. Though recorded somewhat haphazardly and in no particular chronological order, the entries as a whole provide a fairly complete look at the activities and concerns of a fairly typical Appalachian farmer for nearly 15 years during the latter half of the 19th century. 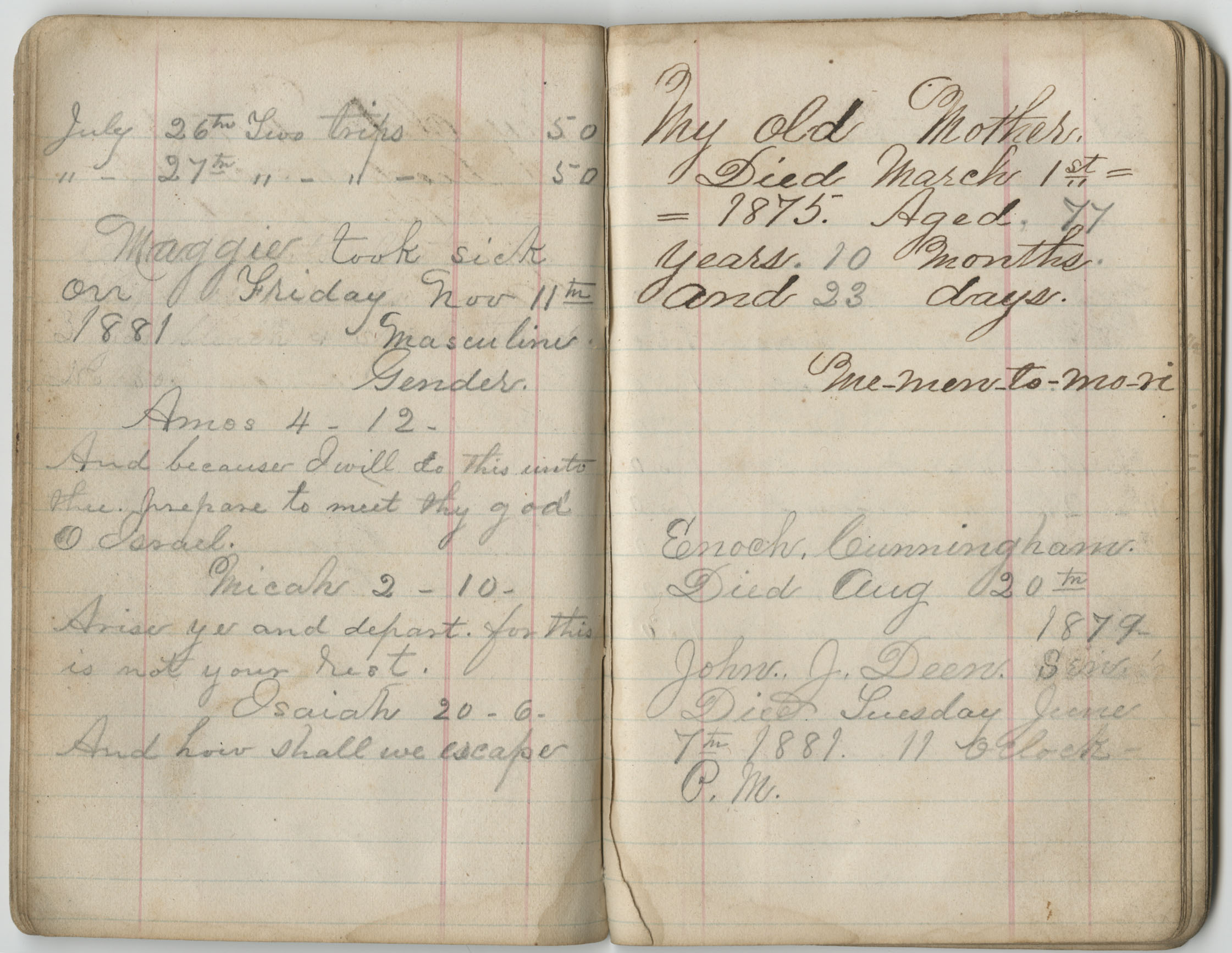 The collection also contains a few items that had belonged to the James youngest son, Charles (1885-1949), who left Braxton County and worked as a motorman in Clarksburg, West Virginia, where he also raised hens and rabbits. Like his father, Charles made use of memorandum books, and in the few that we have, he briefly recorded anything of interest to him, from the day his cat died to the day he saw President Roosevelt.

Unfortunately, theres just not room for me, in this one brief blogpost, to mention all of the interesting little things in the Joseph P. and Margaret James Collection, but it would be a mistake to dismiss it as being of interest only for its Civil War letters. The collection has yet to be processed, meaning that it has not yet been fully organized and inventoried, but as with all of our treasuresboth expected and unexpectedthe collection is available for the use of researchers in the Special Collections reading room during our normal operating hours.