Electric Vehicles of the Early 20th Century and the H. H. Skinner Papers

With all of the attention that electric vehicles have received in recent years, it may seem at times that they’re a new invention, a product of the same 21st-century march of progress that has brought us smartphones, 3D printing, and virtual reality. But in fact, battery-powered vehicles have been around since the 1800s. According to the Department of Energy’s website, electric vehicles accounted for about a third of all vehicles traveling the nation’s roads and streets in 1900, and sales remained strong into the 1910s. This first heyday of the electric vehicle is documented in the H. H. Skinner Papers (Ms1988-061), a small but fascinating collection in Special Collections & University Archives.

A native of New York state, Herbert Harold Skinner (1886-1971) had worked for several electric companies before becoming an engineer/salesman with the Narragansett Electric Lighting Company of Providence, Rhode Island, around 1909.  Three years later, the company became interested in electric vehicles, attracted by their potential as a source for additional sales of electricity, and Skinner’s papers suggest that the young engineer oversaw the company’s foray into electric vehicles. Included in the collection is an in-house report describing how the company would directly benefit from its own use of electrics and how it might realize as much as $188,000 ($5.5 million in today’s dollars) in additional sales per year through the use of such vehicles by its customers. In arguing for electrics, the report delves into their history, technology, and economy. 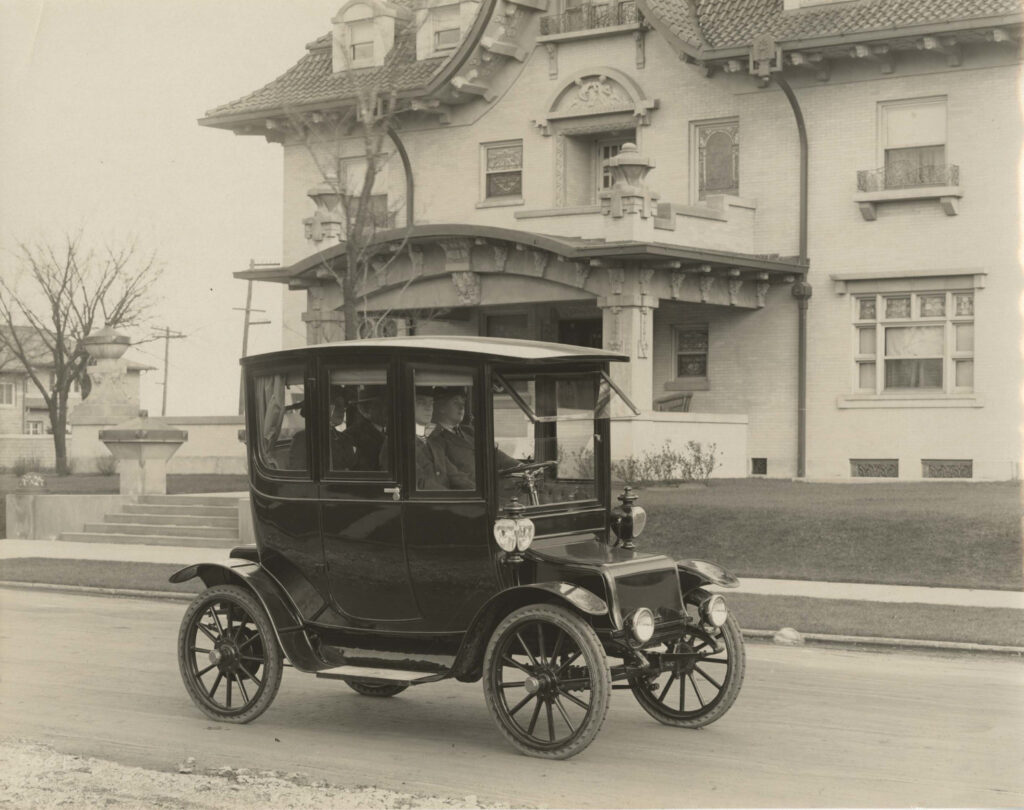 Although the gasoline-powered vehicle’s eventual and complete dominance of the automotive market may appear to have been inevitable in hindsight, such an outcome couldn’t be foreseen at the advent of the 20th century. The horse, as it had for millennia, continued to serve as the primary choice for personal transportation and short-distance haulage. (Steam-powered cars, relying on a long-familiar technology, also maintained a small place in the market during this era.) Early gas-powered vehicles were difficult to start and operate, and they emitted fumes, smoke, and noise. Battery-powered electrics, in contrast, were simple, clean and quiet–advantages that offset their higher price tags. The electric vehicle was particularly well suited for urban, short-distance driving, and many of the ad campaigns for electrics targeted women; others promoted the technology’s use for commercial delivery or for public services.

In marketing electric vehicles to Providence residents and businesses, Skinner and the Narragansett Electric Lighting Company performed a number of cost-analysis studies, several of which are contained within the collection. In late June, the H. M. Phelps Company conducted a five-day demonstration to determine the cost-effectiveness of an electric delivery truck for the Shepard Company’s local parcel delivery service. The report includes complete details for the demonstration routes and the power used  during the five-day period, determining that delivery by electric vehicle would cost the company between $.059 and $.061 per mile and between $.014 and $.019 per delivery. (Supplementing the figures are images of several electric truck and wagon options.) In concluding the report, Skinner extols the virtues of the electric vehicle and its battery, claiming that a full night’s charge would provide sufficient power for a 60-mile route in Providence under ordinary circumstances. Interestingly, one of the benefits listed by Skinner relates to labor. Knowing the desire by businesses to keep all costs low, Skinner asserts: “The electric does not require a chauffeur. When a man has learned to operate the car, he has learned nothing that will justify him in asking for a higher salary. “

Skinner’s customer files contain many smaller studies and reports on electric vehicle performance and cost. In some cases, the reports provide head-to-head cost comparisons with other modes of transportation. A 1913 letter to the Outlet Company, for example, compares the costs of a 1-ton electric delivery truck to those of a horse and accompanying equipment, concluding that the truck would be 51% cheaper to operate. Elsewhere, in a study comparing costs of an electric 4-ton Baker truck with a 4-ton gasoline-powered Packard, the figures show that while the $4500 price tag of the Baker was $1000 higher than that of the Packard, the Baker would cost $1500 less to operate per year. The collection is full of such data and would lead anybody reading it to conclude that electric vehicles were fated to be the mainstay of personal transportation and short-distance haulage for years to come.

As it happened, the Narragansett Lighting Company’s venture into the electric vehicle market was ill-timed, as the confluence of several developments would soon cause the collapse of the electric vehicle industry. Ford’s introduction of the Model T in 1908 further reduced the initial cost of a gasoline-powered vehicle, while the development of the electric starter simplified the starting process. Moreover, as rural road conditions improved, long distance personal transportation became more feasible and demanded a cheap, easily accessible fuel source. Few rural areas had electricity at the time, and gasoline had become a cheap, readily available and inexpensive. Internal combustion technology also continued to advance, somewhat reducing complaints about noise and exhaust.

Of course, none of this happened overnight, and electrics continued to be a significant part of the automotive market for several more years. Soon, however, the battery-powered vehicle virtually disappeared from the nation’s roads and streets. While electricity continued to power such niche vehicles as forklifts, it would be decades before concerns over the environment and the availability of fossil fuels would again spur serious interest in electric and hybrid vehicles as a viable mode of transportation. None of that was obvious to H. H. Skinner and the Narragansett Lighting Company in 1912, however, and in this small collection we can see an optimistic outlook for a then-flourishing industry.

More on H. H. Skinner and his papers may be found in the collection’s finding aid.