Seeds of the Past

At the end of the nineteenth century, the General Education Board (sponsored by John D. Rockefeller) led a nationwide agricultural extension and demonstration movement. In Virginia, the board designated Hollis B. Frissell, head of the Hampton Institute, to organize demonstration work for African American farmers, and Joseph D. Eggleston Jr., the state superintendent of public instruction, to bring the demonstration program to white farmers. The genesis of this statewide effort came at a Richmond meeting in 1906, with a number of influential politicians, university presidents, businessmen, and agricultural experts in attendance. At this meeting T.O. Sandy accepted the offer to be the state’s first extension agent for white farmers. 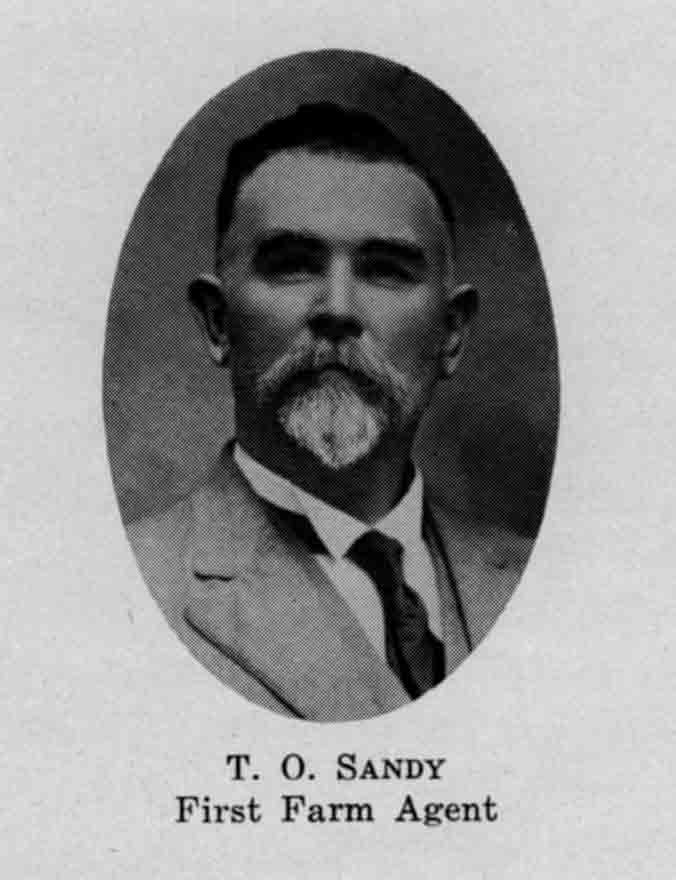 In early 1907, Sandy opened an extension office in Burkeville to serve farmers in adjoining counties. In February, the General Education Board awarded Virginia $4,500 for demonstration work and appointed Sandy as state agent. Sandy hired agents to begin the outreach efforts and recruited farmers to participate in extension programs. The farmers agreed to tend a small plot, typically of less than five acres, and worked with agents to develop husbandry plans and follow budgets.

In 1914 the Smith-Lever Act assigned oversight of nationwide extension and demonstration programs to the Department of Agriculture. At that time, Virginia Tech became the designated institution to coordinate the state’s Cooperative Extension service. In 1916, Sandy moved the extension office to Blacksburg. Despite all of the changes and advances of the past 100 years, Cooperative Extension continues its mission of outreach, sharing information, and improving the lives of farmers.

Before the Cooperative Extension program, Americans received information about what to grow and how to grow it in a variety of ways. Many farmers relied on past traditions and resisted new practices, while others bought more modern equipment and cultivated new crops. One important source of information on new agricultural advances came from seed companies. Mail order seed businesses thrived at the turn of the twentieth century. The heavily illustrated and information rich trade catalogs appealed to both farmers and Americans who wanted a backyard vegetable garden or fruit orchard. Receiving seeds through the mail, rather than by traveling dozens of miles to a town, was an important convenience for farmers.

Special collections has a number of early twentieth century seed catalogs, featuring descriptions and colorful images of fruits, vegetables, and other crops. It is fitting that the same week Virginia Tech celebrated 100 years of Cooperative Extension, the department acquired a new seed catalog from 1903. The catalog comes from the Harry N. Hammond Seed Company, based in Bay City, Michigan, which was self-described as “The Most Progressive and Extensive Mail Order Concern of It’s Kind in the World!”

The first page of the catalog explained that between 1901 and 1902, sales increased 98 percent, which may account for why the company doubled its floor space and built a new warehouse. Robust sales may be attributed to the claim that direct mail order of seeds saved the customer 100-200 percent than if they purchased through a retailer. As for their subscribers, the company expected to mail out 500,000 (yes, half-a-million) catalogs to interested buyers. Oddly enough, according to OCLC Worldcat, just two libraries hold the 1903 catalog. Of course many libraries with collections of trade catalogs may not catalog the titles individually or catalog them at all. 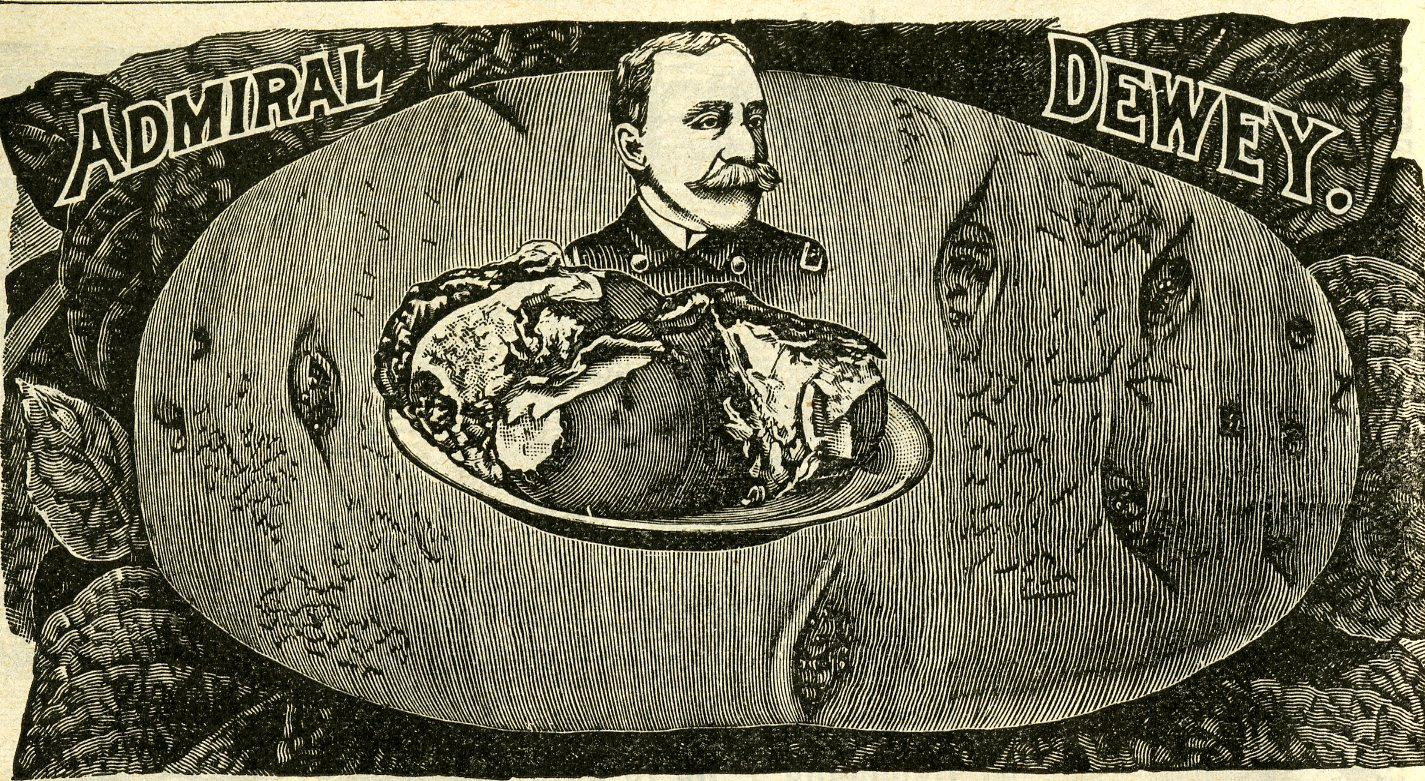 Anyway, back to the seeds. The catalog begins with several varieties of potatoes, with “Hammond’s New Extra Early Admiral Dewey Potato” as perhaps the best choice for patriotic Americans who want to remember victory at Manila Bay, just five year prior, while baking, frying, or boiling their tubers. The catalog offered customers an enormous selection of garden staples such as beans, celery, beets, carrots, sweet corn, onions, cabbage, and melons. 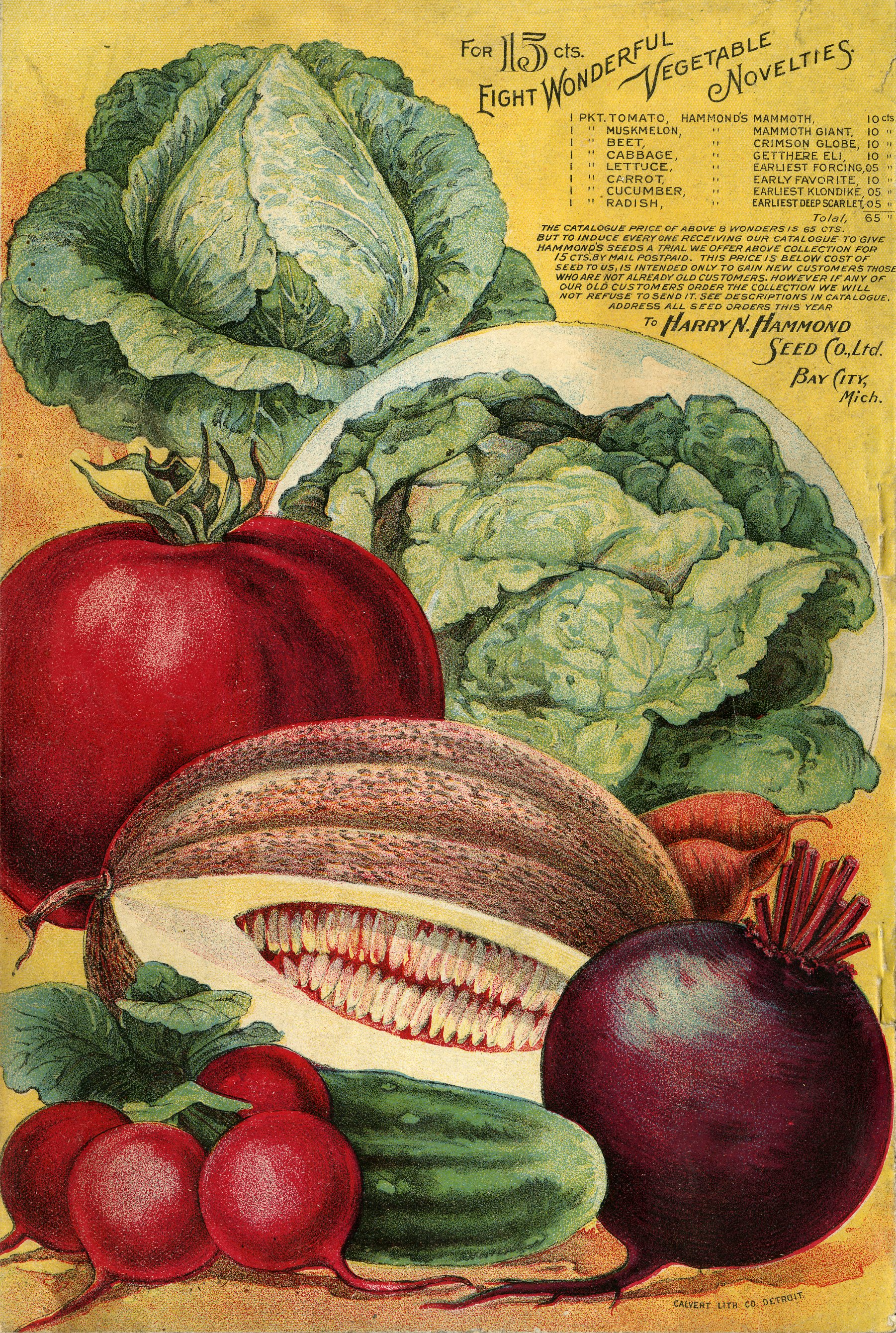 For farmers, the catalog listed a wide selection of grains (oats, barley, wheat, corn, and millet) and grass seeds for hay and pasture. Like other such companies, Hammond’s featured page-after-page of flower seeds. Finally, the last page of the catalog advertised the company’s health food (malted grains and nuts treated with Pepsin) which came in packets and could be served cold with milk or cream, or mixed with hot water. The healthful product promoted good nutrition and digestion, but the advertisement said nothing about the taste. The company encouraged buyers to add an extra $0.15 to their seed order and try a packet for “Breakfast, Dinner, or Supper.”

For today’s readers this seed catalog is comical at times and sometimes disconnected from the present. In 1903, this type of trade publication provided Americans with a great deal of information about new crops and growing methods. Even though we take Cooperative Extension for granted, its services provide farmers and backyard gardenerd with reliable information about planting, growing, and cultivating just about anything.

More importantly seeds have modern day significance. Across the country, farmers markets are full of heirloom fruits and vegetables, farmers operate active seed exchanges, and growing numbers of Americans demand that their plates contain no genetically modified foods. It seems that the seeds of the past have enormous value in the present.

View all posts by aisforarchives

One thought on “Seeds of the Past”