For better or for worse, I don’t make a habit of looking at the Collegiate Times, at least not the issue of the day. This isn’t a judgement, just the reality. I do often look at it in the course of my job as an archivist at Special Collections, and just a few days ago I came across the 1986 April Fool’s Parody issue. The masthead proudly (or, maybe not so proudly) proclaimed Collegiate Slime and “Virginia Technical Institute’s Stupid Yellow Rag.” The location was “Bleaksburg, Fajenyah” and the index listed sections for Sex, Beastiality, Scandal, Lies, Demagogery, and Free Beer. 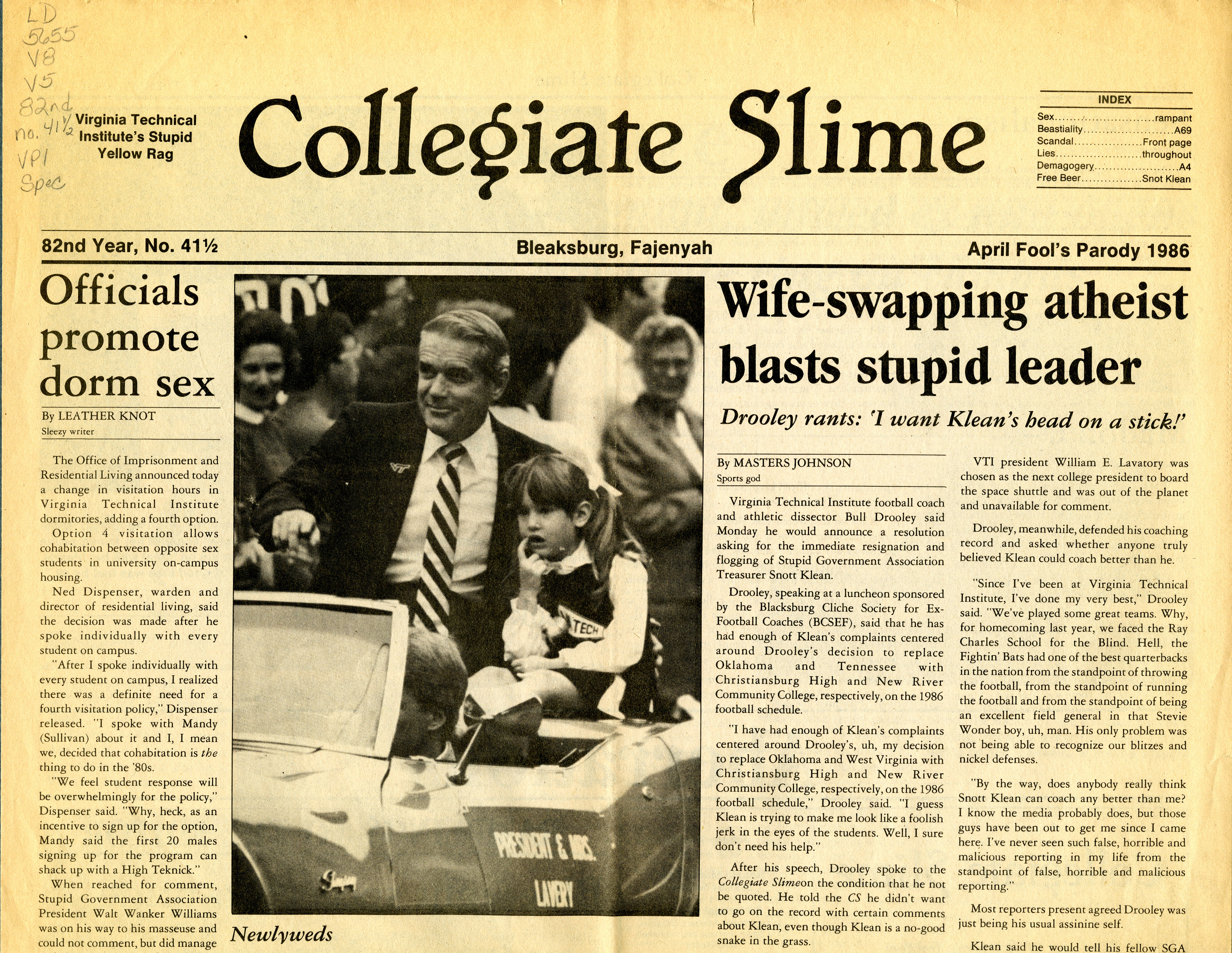 OK. College humor, what can you do? In one form or another, it’s probably as old as the oldest university. But I got curious, given that April 1st was coming up and decided to do a less-than-comprehensive review of the history of these issues. The 1977 issue served up The Cowlegiate Crime and Virginia Polywrecknic Institute and State Asylum. 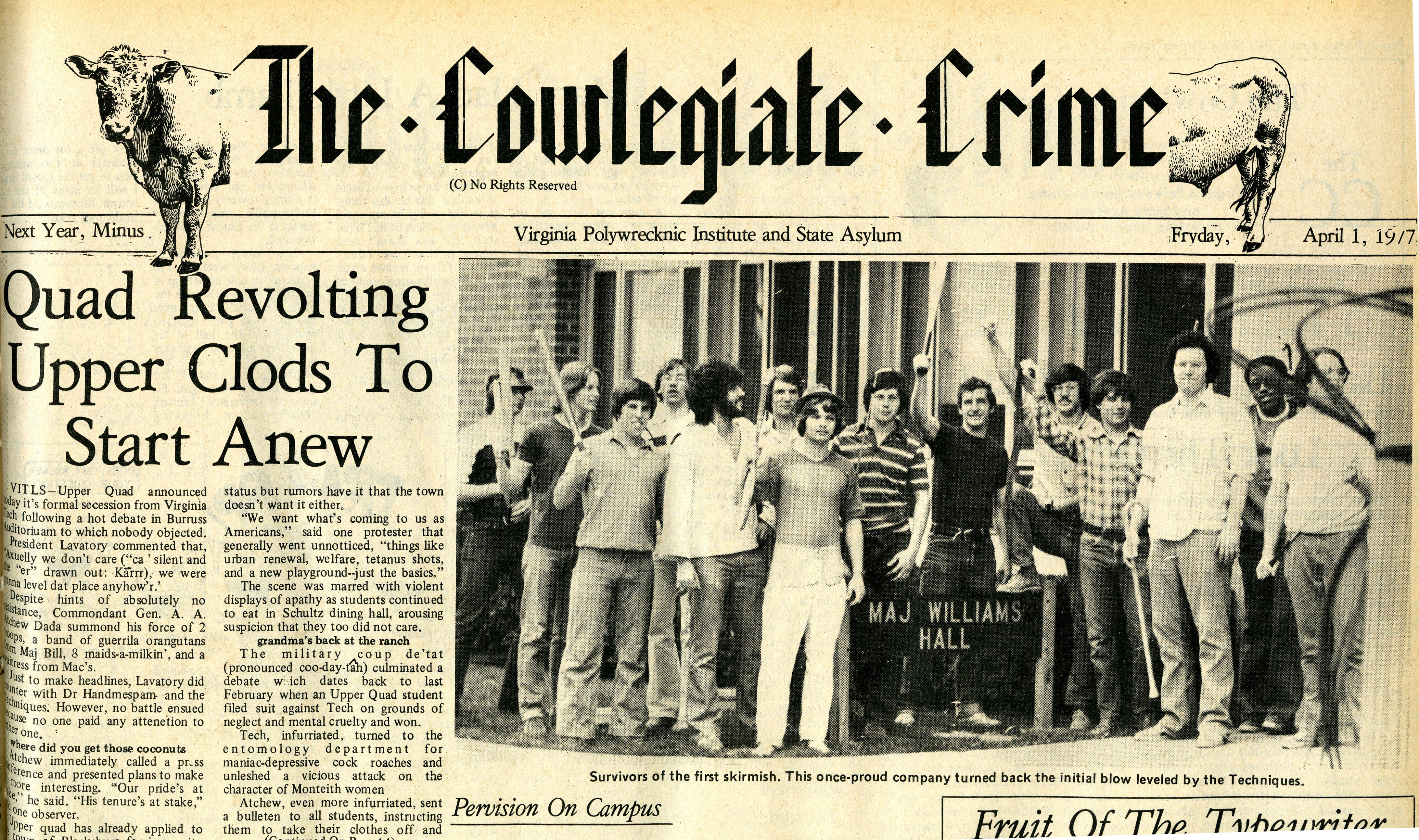 The Crime appeared again the next year with the lead story, “Corps Demands Total Power” and again in 1982 with what was becoming a usual mix of effrontery, barely(?) post-adolescent male humor, and a penchant for superimposing an image of someone’s head on a body to which it did not belong. In 1988, the Slime was back, this time as “Virginia Wreck’s Fascist Rag,” still in Bleaksburg, now Virginny, and, again, in 1990. That year Bart Simpson and WelWhee Tried can be found among the bylines, and a few sample pages are numbered 2BE, NOT2BEE, and 4AUTNBEA. In 1991, however, something else happened.

In the April 2nd issue of the Collegiate Times, editor Jim Roberts published a commentary in which he describes how the annual issue of the Slime had been produced and was ready for distribution. He writes:

Last April, I argued that the parody issue was good for the CT and the university, because it allowed the staff to take a satirical look at the issues which have surrounded us all year. Twelve months later, I have decided that is not within the scope of responsibilities of a news organization. . . . I decided last night to have the 14,000 issues destroyed.

Roberts described the adverse reactions to the previous issue of the “parody” as well as the tradition of producing the issue. Many thought the issue “insensitive,” that it had gone too far, and he concluded “the traditions of the CT far exceeds whatever fun we could [have] with six pages of jokes and unflattering pictures.” In the end, he writes that many may think he made a “poor decision,” but that, in the news business, “we’re often better off being criticized not for what we print, but for what we don’t print.”

The April 5th issue of the CT suggests just how right he was. As reported on page one, sometime in the early morning of the 3rd, a former CT employee distributed copies of the paper that had been set aside to be recycled. By 7:30 that morning, copies had been found and removed from Burruss, Newman Library, and Norris Hall.

According to the article, “Professors, women, minorities, SGA leaders and by and large almost every sector of the university contacted administrators about the issue.” Darrel Martin, assistant to President McComas commented on the line between parody and “the occasion where attitude and language are not part of the journalism profession or part of an educational environment.” In the same issue an editorial titled “Slime offensive” made the point more directly. The writer, coordinator of the Sexual Assault and Victim Education Support Services peer education program, wrote:

In reference to Adolph McMillan and Paul Hell’s articles (who, by the way, provided only pseudonyms), your writings outraged me. Your words were offensive and debilitating to women. . . . As long as attitudes such as Adolph’s and Paul’s are continued to go without a challenge . . . violence against women will continue to persist.

Also in the same April 5th issue, the CT editorial board member who would be editor-in-chief for 1991-1992 said that after consulting with CT staff several changes would be made for the next year’s parody issue. The name would be changed to avoid association with the past issues of the Slime, it would be printed in tabloid form to differentiate it from regular CT issues, and it would be completed a week before distribution.

Honestly, I’m not sure they quite got the point.

Oddly enough, this same week when I looked into the CT Parody issues, I came upon another bit of Virginia Tech (ok, Virginia Agricultural and Mechanical College) humor. In June 1905, the first (and only?) issue of The VA. Wreck, a take-off on the college’s newspaper, The Virginia Tech, was published. (Yes, the real newspaper was called The Virginia Tech.) Blacksburg is said to offer Hot Summers, Arctic Winters, Reasonable Board, Poor Food, and Hard Beds. The paper was published by “The Deanery” on a “Tri-Weekly” basis: “Comes out one week and tries to come out the next.”

Perhaps to set the stage for what will follow, the four-page paper comments:

Some seem to think this paper is a burlesque on the Virginia Tech, but such is not the case, and we decline the honor. If anything, the Virginia Tech is the burlesque; anyway it is a parody of some sort too deep for us to fathom.

And so much more. It felt a little odd to be spending so much time with documents from the ’70s, ’80s, and ’90s, let alone newspapers from just a couple of years ago. After all, I’m an archivist. Ahhh, the Va. Wreck. 1905. That’s better. We’re not just concerned with the past . . . but with the PAST! Right? At least 50 years ago! The older the better! Right? That’s the real joke. April Fool’s!