Very often when reading old letters, it’s easy to lose a large part of the writer’s meaning, even when the penmanship is perfect and the grammar impeccable. Being far removed from the writer’s time and place, we lose a great deal of the context, of the experiences and culture shared by the correspondents, and may, in our ignorance, overlook accounts of significant events. The C. L. Porcher Letter (Ms1988-072) relates an event in Black history–albeit from the perspective of a white woman–but that aspect of the letter could easily be missed without a careful reading of its contents.

A native of Charleston, South Carolina, Clelia Lightwood Porcher was living and working as a teacher in that city when she sat down to write a letter on September 12, 1876. After briefly discussing a family matter, Porcher remarks that “Isaac was summoned and was out until after one, but Sunday + Monday night the rain was so steady that no disturbance was even looked for …” (“Isaac” was probably Isaac Mazyak, or Mazyck, who appears in the 1880 census as a 24-year-old clerk, boarding in the Porcher home.) Later, Porcher adds that “[t]he Mayor’s and Governor’s proclamation has only had the effect of making them more determined than they were before.” She continues by noting that the city is well protected and the danger likely over, then describes a large meeting of women at the Confederate Home, held for the purpose of organizing refreshments for men serving guard duty throughout the city. (She’s not optimistic about the women’s organization, however: “We were there three blessed hours and came away as wise as I went about what was to be done.”) Porcher also expresses her feelings about the mood in the city: “I have never been so excited in my life before + every body can think and talk of nothing else … We hear the slightest unusual sound during the night, so as you may imagine our sleep is not very profound.” But the following day, Porcher reports that the unrest has been quelled: “[I]t is thought that everything now will be quiet, the only thing is, our men cannot relax their vigilance.” 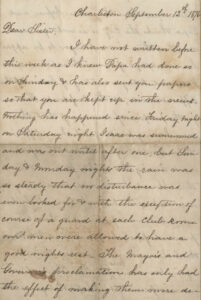 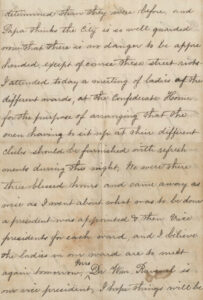 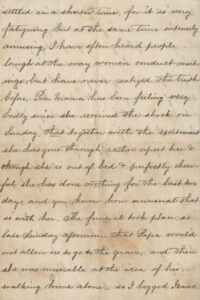 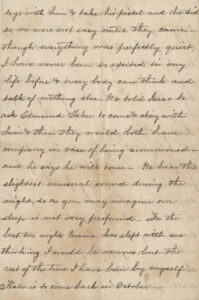 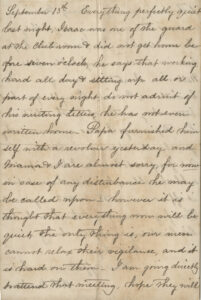 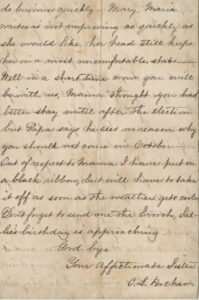 All of this hints at some civil disturbance experienced in Charleston, but what was it? Who were the “them” to whom Porcher refers? Why were they “more determined” after hearing the mayor’s and governor’s proclamations? A few online searches reveal that Porcher’s letter relates to politics and race relations in Charleston near the end of Reconstruction.

Early in September 1876, Charleston saw two Democratic Party meetings in which several local Black residents spoke about their reasons for abandoning the Republican Party. In a Black Democratic Party club meeting held on King Street on September 6, two Black speakers spoke against the Republican Party. Afterward white Democrats escorted the speakers through a crowd of Republicans that had gathered outside the Democratic meeting. Violence between the two groups ensued, and the intervention of federal troops and an integrated local police force was of little consequence. (Not on hand that first night were the city’s many “rifle clubs”–essentially local militia–which were the clubs to which Porcher refers.) Windows were smashed, stores were looted, a number of people were assaulted, and one white man was accidentally killed.

That Porcher’s letter was written six days after the incident suggests that the unrest continued for some time. In response to the violence, Republican South Carolina Governor Daniel Henry Chamberlain issued a proclamation promising to “secure to every man, of whatever political party, the right to speak, act and vote freely and safely …” Neglecting to state what actions he would take to restore order, Chamberlain called on all citizens to do their utmost in preserving the peace: “The spirit of poiltical intolerance, in all its forms,” he wrote, “is the direst curse which now oppresses our State, and peace and prosperity will never come until that foul spirit is finally exorcised.” Despite his lofty ideals, Chamberlain was seen as ineffective in suppressing the violence. A lack of voter confidence in his ability to quell the violence, coupled with suppression of Black voters and the defection of others to the Republican Party, led to Chamberlain’s defeat in November.

The feelings aroused that fall in Charleston and elsewhere would play out in the national election. Losses by Republicans in November, together with the Compromise of 1877, which led to the withdrawal of the remaining federal troops from the South, ended the promises of Reconstruction. A close reading of the Porcher Letter provides a look at this incident of Reconstruction.