The Merle Easton Collection is fully processed and the finding aid is available here. 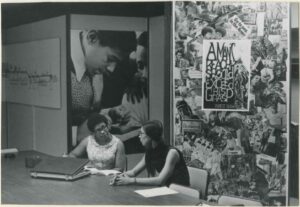 Born in 1940, Merle Easton grew up in Sitka, Alaska, a port town on Baranof Island, southwest of Juneau, just to the west of British Columbia. She attended several schools in the Pacific Northwest before ultimately earning her Bachelor of Architecture from the University of Washington in Seattle in 1966. Interested in patterns of urban development and accounting for community needs in design, she developed a plan for a Community Center in central Seattle for her thesis project.

Following graduation, Easton found steady work in the Mid-Atlantic states. She worked independently, but also with agencies focused on concerns around urban renewal, affordable housing, and community displacement. As an independent architect, Easton developed the “street school” concept that was an outgrowth of the Mantua-Powelton Mini-School (MPMS) in West Philadelphia. Her conceptual design was intended to become a template for decentralized, modular schools, using inexpensive prefabricated units, integrated into their local neighborhoods. While the mini-school itself wasn’t a product of Easton’s design, it was her direct inspiration. An urban renewal project focused on refurbishing an abandoned factory building to house a small, integrated, and community-controlled school, the Mini-school sought to implement a radically different curriculum in a “found” space. The school served roughly 120-150 students (nearly all Black) in the two years it was open, all drawn from the surrounding area, and was meant to be a bridge between the middle class Powelton neighborhood and the predominantly Black and underserved Mantua neighborhood.

Riffing on the underlying philosophy of the Mini-school, Easton collaborated with neighborhood activist and MPMS principal Forrest Adams to develop a design geared toward scaling the existing school into a “mini-school system.” This prototype would offer affordable and sustainable growth that would expand the school without disrupting community life – it would rehabilitate and reuse space and resources, minimize waste and impingement, and weave community life and experiential learning into the fabric of elementary education. Easton developed drawings, scale models, and a film to promote the concept and get critical buy-in from the Mantua and Powelton communities and various funding agencies.

The project was written about in two issues of Progressive Architecture, Design and Planning: The New Schools by James Morisseau, and in Women in American Architecture: A Historic and Contemporary Perspective, edited by Susana Torre. In Torre’s book, Easton’s vision is described as “designed to cut time and expense in school construction, to revitalize high density inner city neighborhoods and to provide a more complete and relevant education including the entire community in the process. The school utilizes ‘found’ spaces, such as streets and empty lots. Prefabricated classrooms and toilets, multimedia domed meeting rooms and retractable barrel vaults plug into a community and draw upon people, existing businesses, and institutions as educational resources” (Torre 164). Adams and Easton both advocated for the idea of a “street school” as more cost effective than the traditional alternatives, arguing it would cost $7-10 per square foot compared to $21-30 per square foot of conventional school construction (Progressive Architecture 34). And yet the idea failed to garner enough critical traction to be fully realized.

The Mantua-Powelton Mini-School foundered for a few reasons, some rooted in a lack of critical oversight, others located in the novelty of its power structure. In Seven Schools, a 1972 publication from The Young Great Society Building Foundation, the authors cite the fact that the school had too little time to fully develop multiple radical approaches to education. This, coupled with not making good on its promise of engaging the community, lack of continued funding, and disagreements among its teachers regarding both curriculum and discipline, made for chaotic implementation and practically doomed the school from the start (Goldfarb et al. 33-35). On top of these problems there was the additional stressor of the refurbished factory being poorly adapted as an educational environment.

The mission of the school and, later, the “school street concept” was and continued to be community empowerment, but as Mark R. Shedd, superintendent of the School District of Philadelphia from 1967 to 1972, admitted in a private interview: “In the early days I thought community control was the thing. Now I think shared power is more realistic. I don’t think the central administration or the board or the superintendent can abdicate. I don’t think that’s proper or realistic. The mini-school represented, in part, an abdication of our responsibilities. We didn’t insist from the outset on the proper kind of management controls… We should have insisted upon a much closer audit and monitoring function. But we didn’t” (Shedd as qtd. on 35). Here there are multiple interlocking structures at play: the educational system itself, local power structures, community participation incentives (needed to generate buy-in), zoning (and redlining), resource allocation, and so on. While the mini-school and Easton’s “school street concept” were distinct from each other, I think it’s an interesting exercise to map the lessons of the mini-school onto the larger vision of the “street school.” That’s not to say that the school street or mini-school system would necessarily have failed in its implementation, but the exercise aims to understand how fraught it can be to navigate multiple entrenched systems while trying to generate innovative design solutions.

After her work on the mini-school Easton went on to work as a draftsperson, job captain, and staff architect at several firms and on a variety of projects, including hospitals, churches, and schools. As job captain at Victor H. Wilburn & Associates, she produced a report, included in her collection, analyzing the programs of the Wilmington Housing Authority and proposing measures and policy adjustments to make their programs more effective. In the introduction to the WHA report she summarizes the problem with Wilmington planning: “policy sprawl.” Quoting an interviewee: “‘Policy sprawl’ – that ungraceful, bits-and-pieces spread of plans and projects without any overall vision to offer the public” (representative of Gauge Corporation quoted in WHA Report). A consistent thread running through Easton’s materials is her commitment to “big picture” thinking about long-term development and planning and I’m so glad her collection is now fully accessible to researchers.