A Trip Up the Sweetwater River

The title of this occasional series may be something of a misnomer, as the materials discussed arent hidden at all but instead are readily located through existing online discovery tools. Still, though adequately described for retrieval, these items may remain hidden to interested users who overlook them because they’re housed in such unlikely locations.

Any manuscript repository of significant size or age is bound to have its share of outliers, collections that simply dont fit into any of the repositorys primary focus areas but somehow find their way into the repository, through one route or another. With our collection focuses here in Special Collections at Virginia Tech being well known, researchers recognize us as a go-to resource for primary and secondary sources in several subject areas, including university history , women in architecture, the history of food and drink, local and regional history, and the Civil War in Virginia. The casual user, however, may be surprised to learn that a number of our collections dont relate to any of these things. Many of these are legacy collections, materials that were acquired before the department narrowed its scope to a few well-defined focus areas.

And that explanation brings me today to write about an item that we simply call the Wyoming Photograph Album (Ms2017-026), which had been housed within the department for a number of years before recently being made more widely accessible through the creation of an online finding aid.

Measuring 11 x 12 inches and containing 75 photos, the album documents the journey of a group of unidentified menmost likely a surveying teamthrough central Wyoming around the turn of the 20th century. A photo on the first page of the album, bearing the stenciled title “A Trip Up the Sweetwater River, explains the event commemorated by the collection. 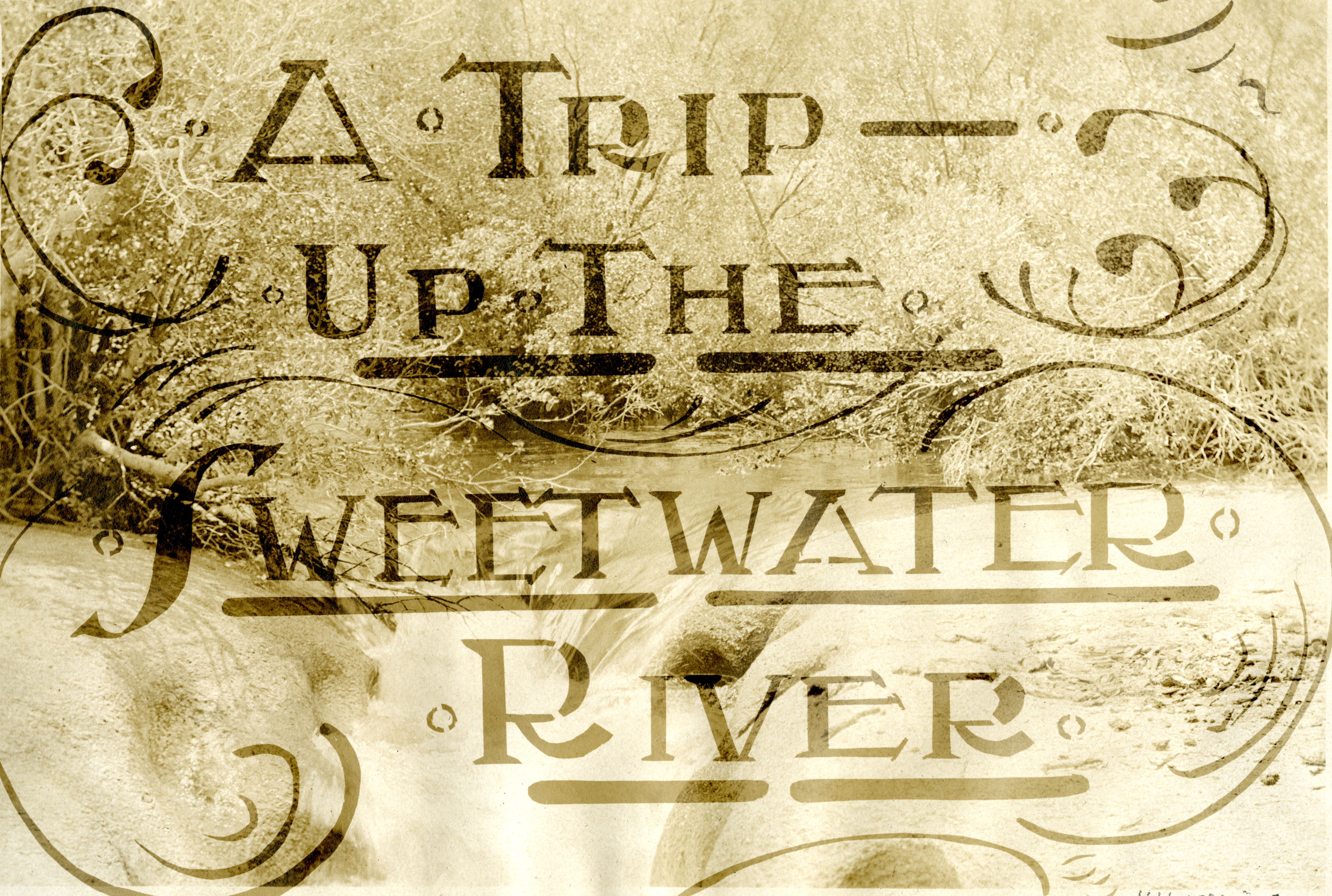 On the pages that follow, the albums anonymous creator has pasted photos that chronicle a journey that was deemed of sufficient personal significance to be memorialized.

The albums first few pages include photos of several public buildings and private residences in Cheyenne. While Cheyenne isnt on the Sweetwater River, the city was likely the departure point for the groups journey. From Cheyenne, the group made its way north to Glendo, then westward to Casper, and eventually south to the Sweetwater, with a photographer documenting the landmarks of both the natural and built environments throughout the trip.

Included among the photos are images of ranches, livestock, dams, rock formations, rivers, and mountains. Together with these sights, the scrapbook records the surveyors at work and hints at the hazards of early travel across the plains of Wyoming.

Elsewhere, the scrapbook records the simple pleasures of camp life, as in the chow-time photo below, captioned Camp Sweetwater. The inclusion of a National Biscuit Company crate in this photo allows us to somewhat narrow the date of the photograph, as National Biscuit (today better known as Nabisco) was formed in 1898. 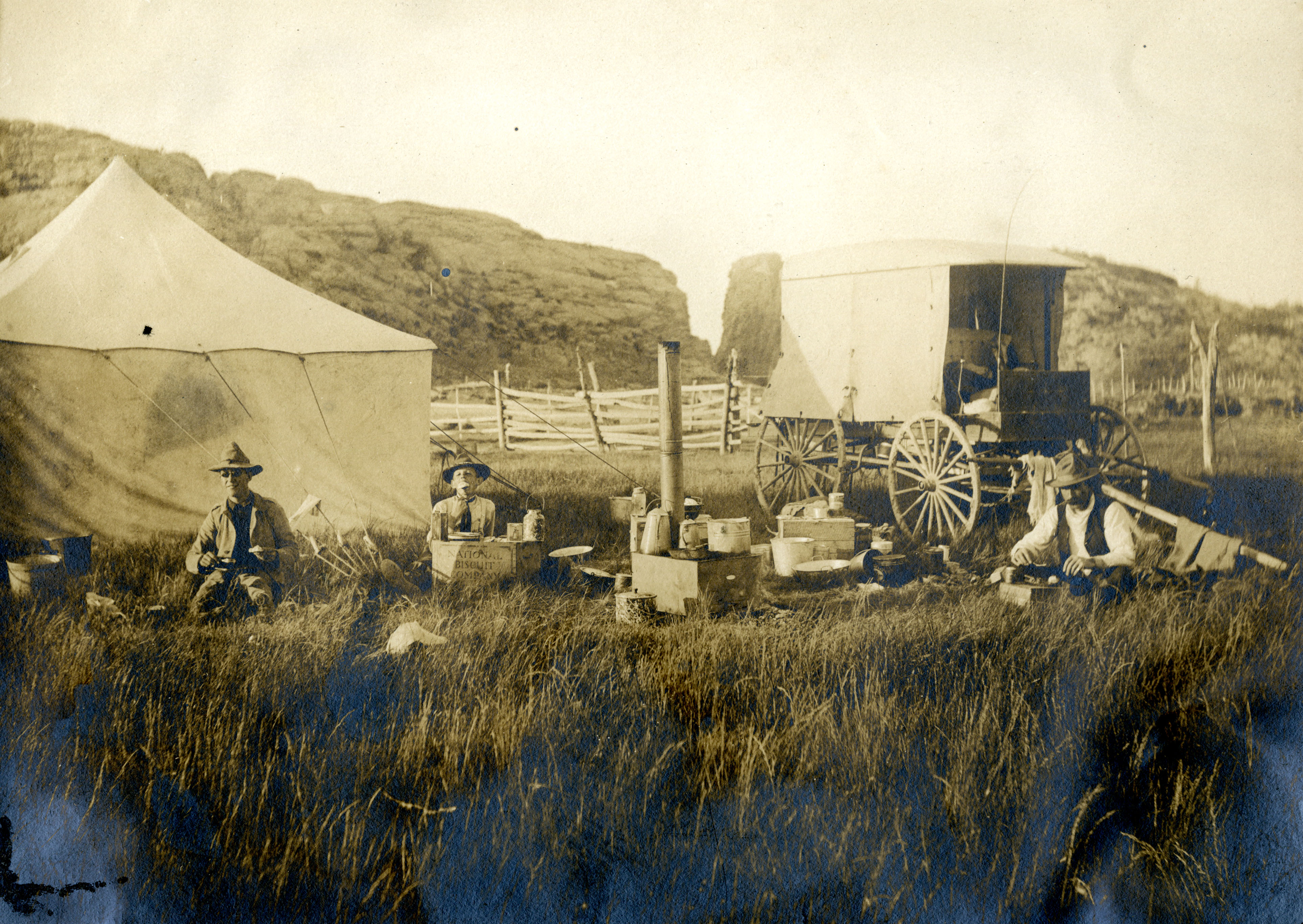 The team eventually made its way into Wyomings gold- and iron-mining region, and several photographs document the areas mining enterprises and settlements. The level of clarity in some of these images is remarkable, and the photos provide a glimpse into early development in the area.

The scrapbook ends, as we may assume the journey also did, near the Wind River Mountains in western Wyoming. Unfortunately, the final photograph, captioned A Remembrance of the Past and which may have provided some clue as to the identity of the scrapbooks creator, was removed.

At least one photograph in the album is attributed to C. C. Carlisle, and a little online digging led to information on a Charles C. Carlisle (born 1876). His biographical sketch in I. S. Bartletts History of Wyoming (1918) notes that Carlile, a civil engineer, worked in various capacities connected with waterworks and civil engineering during the first two decades of the 20th century. An article in the June 16, 1904 edition of the Wyoming Tribune mentions that a survey of the central part of the state being conducted by assistant state engineer Carlisle had measured the Sweetwater River at Devils Gate. It seems safe to conclude that this is the survey documented by the photo album. Further digging by an interested researcher might reveal whether Carlisle compiled the album.

Outlier collections sometimes contain outliers of their own. Tucked into the front of this album, consisting entirely of Wyoming scenes, is a photograph of a man on horseback at Gibson Park, Great Falls, Montana in 1899. The man is identified as Wallace Coburn.

Wallace David Coburn (1872-1954), a Great Falls rancher who gained national renown as a cowboy-poet through publication of his Rhymes from a Round-up Camp, later operated a movie theatre. The theatre serving as his springboard into the field of motion-picture entertainment, Coburn established his own film studio, Great West Film Company. Great West appears to have produced only one film The Sunset Princess, based on Coburns own poem, Yellowstone Petes Only Daughter. The would-be mogul later appeared in a few films produced by others, most notably the silent anti-German propaganda film, The Kaiser, the Beast of Berlin. Why Coburns photo appears in this album devoted to a survey of the Sweetwater River will likely remain unknown.

The Wyoming Photograph Album would of course be of interest to anybody researching irrigation and development along the Sweetwater River, early Cheyenne architecture, and the regions mining history. (Astute researchers could undoubtedly make some connections that I havent even considered.) So while this stand-alone collection may seem a misfit of sorts housed here among our collections, its potential value to interested researchers makes it worth a little extra promotion on our part. The album can also serve as a reminder to researchers in other subject areas not to overlook far-flung resources when searching for relevant materials.