Beckett and Gorey at Gotham

A few days ago, for no apparent reason, except, perhaps all the rain we’ve been having, I thought of a quote from a book by Samuel Beckett. Even though it had been about forty years since I first read it, I remembered the quote quite well. The in-and-of-the-world lyrical beginning was especially unusual for Beckett, in my experience. Still, I could not remember which book it came from. Beckett was a favorite in those days, and I had read a lot of his work (maybe more than was good for me) in a pretty short period of time. I didn’t think it was a particularly famous quote. For example, it wasn’t the end of The Unnamable:

. . . you must say words, as long as there are any, until they find me, until they say me, strange pain, strange sin, you must go on, perhaps it’s done already, perhaps they have said me already, perhaps they have carried me to the threshold of my story, before the door that opens on my story, that would surprise me, if it opens, it will be I, it will be the silence, where I am, I don’t know, I’ll never know, in the silence you don’t know, you must go on, I can’t go on, I’ll go on.

Nope, not that one. It wasn’t from the scene in Molloy that involves sixteen sucking stones, a number of pockets in a greatcoat (and trousers), and an attempt to place the stones in those pockets in such a way that Beckett’s character could most easily assure himself of sucking those stones in equal measure over time.

And it wasn’t the passage that begins with, “I can’t help it, gas escapes from my fundament on the least pretext” and ends with, “Extraordinary how mathematics help you to know yourself.” This is also from Molloy, and I’ll let you imagine what comes between those two fragments.

At about the same time I was trying to remember which book “my” quote came from, I realized that I’d never seen nor gone in search of a book by Beckett in Special Collections. This, of course sent me to the stacks (ok, to Addison, first) in search of Beckett. I know we have a large collection of modernist fiction, but over more than seven years . . . no call for Beckett. What I came up with surprised me. Not only was it a book I’d never seen before, it was one I’d never heard of. This required a bit of sleuthing.

The book, All Strange Away, was written in 1963–64, but not published until 1976 in the special edition we have in Special (naturally) Collections . . . an edition illustrated by Edward Gorey! (! The idea of a collaboration between Gorey and Beckett is amazing itself !) That’s a picture of Gorey at the top of this post, along with one of Beckett and the covers and spine from All Strange Away. Gorey wrote more than 100 books and illustrated many more. His dark sensibilities are often front-and-center in books like The Gashlycrumb Tinies in which twenty-six children whose names begin, in sequence, with each letter of the alphabet, have their deaths described (and illustrated) in one of twenty-six ways . . . all in rhyme, of course. (“M” is for Maud who was swept out to sea. “N” is for Neville who died of ennui.) Beckett’s text in All Strange Away begins:

Imagination dead imagine. A place, that again. Never another question. A place, then someone in it, that again. Crawl out of the frowsy deathbed and drag it to a place to die in. Out of the door and down the road in the old hat and coat like after the war, no, not that again. Five foot square, six high, no way in, none out, try for him there.

Like several of Beckett’s works from the mid-sixties, All Strange Away takes place in a bare space, or nearly bare. A stool is present, but the only dynamic seems to be imagination, that and the alternate presence and absence of light. Oh, and, maybe, the space changes size. In this text, the space is called the Rotunda and only one person inhabits it. In The Lost Ones, started by Beckett in 1966 and published in 1970, the space is a flattened cylinder 50 meters around with rubber walls 18 meters high. Two hundred people inhabit this space, which leaves about 1 square meter per person. Light and heat fluctuate, and there are ladders with which to climb the walls, and recessed spaces in the upper parts of the wall to occupy. I remember reading The Lost Ones, too.

Gorey’s illustrations, one or two per page, grace the margins of All Strange Away. Here are three of them:

But wait, there’s more. How did Beckett and Gorey, who could be seen as an ideal illustrator for Beckett, ever get together in the first place? The key lies in the publisher, the Gotham Book Mart of New York. First, if you’ve never had the opportunity to visit the Gotham Book Mart, forget it. You missed your chance. This literary bookshop and meeting place—the kind of place that just doesn’t exist anymore—closed in 2007 after operating continuously somewhere in midtown Manhattan (it did move a few times) since 1920. It was still enjoying its long heyday when I used to visit in the 1970s and 80s. The James Joyce Society, for example, was founded there in 1947 with the founder and owner of the shop, Frances Steloff, serving as the society’s first treasurer.

If you lived in New York and were interested in things literary, it was a regular stop. If you were visiting town, you’d go to see books that you’d see nowhere else, along with dozens and dozens of photographs of writers, often in the shop, perhaps standing where you were standing.

Although Gorey’s first book, The Unstrung Harp was published in 1953 and The Doubtful Guest (1958), did much to establish his standing among a wider readership, it was his friendship with Andreas Brown, owner of the Gotham beginning in 1967, that really propelled his career. Actually, the Gotham Book Mart published more than a dozen of Gorey’s books, exhibited his illustrations, and, generally, brought him and his work to something like a mass audience. (Gorey’s annimation appears every time Mystery! is introduced on PBS.) One presumes that Brown may have brought the Beckett to Gorey, but I know of no details on the matter. I now know that Gotham Book Mart also published another collaboration between the two, Beginning to End, in 1989, just before Beckett died. 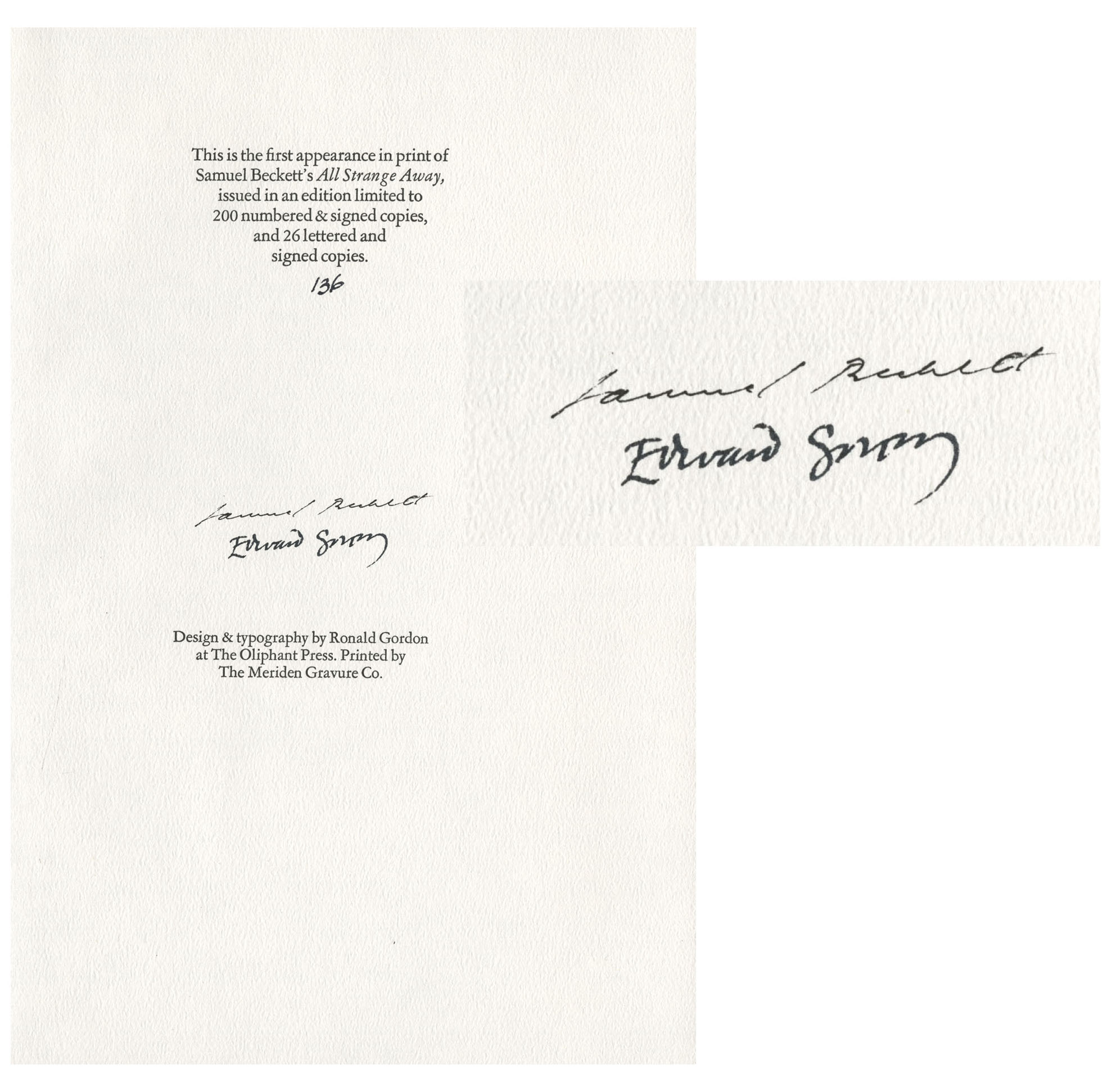 All in all, this was quite the find. You never know what will show up in Special Collections until you have reason to look. (Today, I found out that we have a first [1854] edition of Thoreau’s Walden. But that’s a story for another day.)

So what was the quote that provided the germ for this post? It was from a work of Beckett’s called The End, written in 1946:

The earth makes a sound as of sighs and the last drops fall from the emptied cloudless sky. A small boy, stretching out his hands and looking up at the blue sky, asked his mother how such a thing was possible. Fuck off, she said.

How do you top that on a rainy day?