On the 70th Anniversary of D-Day

. . . it would not be unusual, on this campus, to focus on the story of Jimmy W. Monteith Jr. He came to Virginia Tech in 1937 from Richmond to study Mechanical Engineering. In October 1941, before completing his studies, Monteith, like many of his contemporaries, joined the armed forces, and by 6 June 1944 had already seen combat in North Africa and Sicily, and was among the thousands of soldiers who had trained for the invasion of France. On that day, as a lieutenant in the 16th Regiment of the 1st Infantry Division, Monteith was among the first to land in Normandy on Omaha Beach. What happened next is summed up in the Citation that accompanied the Medal of Honor awarded to him for the action of that day:

For conspicuous gallantry and intrepidity above and beyond the call of duty on 6 June 1944, near Colleville-sur-Mer, France. 1st Lt. Monteith landed with the initial assault waves on the coast of France under heavy enemy fire. Without regard to his own personal safety he continually moved up and down the beach reorganizing men for further assault. He then led the assault over a narrow protective ledge and across the flat, exposed terrain to the comparative safety of a cliff. Retracing his steps across the field to the beach, he moved over to where 2 tanks were buttoned up and blind under violent enemy artillery and machinegun fire. Completely exposed to the intense fire, 1st Lt. Monteith led the tanks on foot through a minefield and into firing positions. Under his direction several enemy positions were destroyed. He then rejoined his company and under his leadership his men captured an advantageous position on the hill. Supervising the defense of his newly won position against repeated vicious counterattacks, he continued to ignore his own personal safety, repeatedly crossing the 200 or 300 yards of open terrain under heavy fire to strengthen links in his defensive chain. When the enemy succeeded in completely surrounding 1st Lt. Monteith and his unit and while leading the fight out of the situation, 1st Lt. Monteith was killed by enemy fire. The courage, gallantry, and intrepid leadership displayed by 1st Lt. Monteith is worthy of emulation.

Monteith is one of seven Virginia Tech alumni who have received this nation’s highest award for valor. But if you want to get beyond the descriptions of war, seek out the manuscript collection that bears his name, the Jimmie W. Monteith Collection, Ms1990-062, in Special Collections and read the letters he wrote home before dying in France, or the letters of condolence and sorrow sent to his mother afterwards. 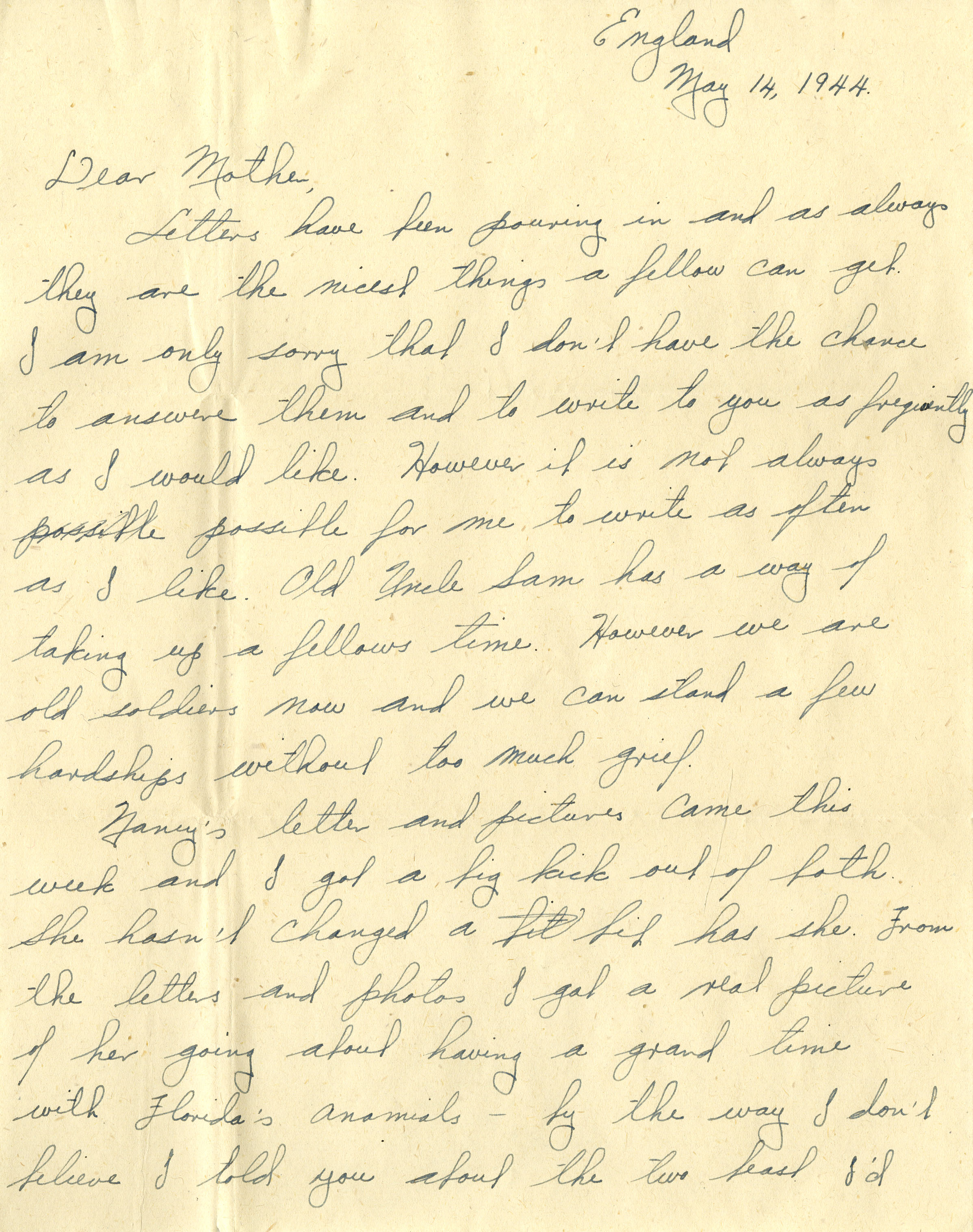 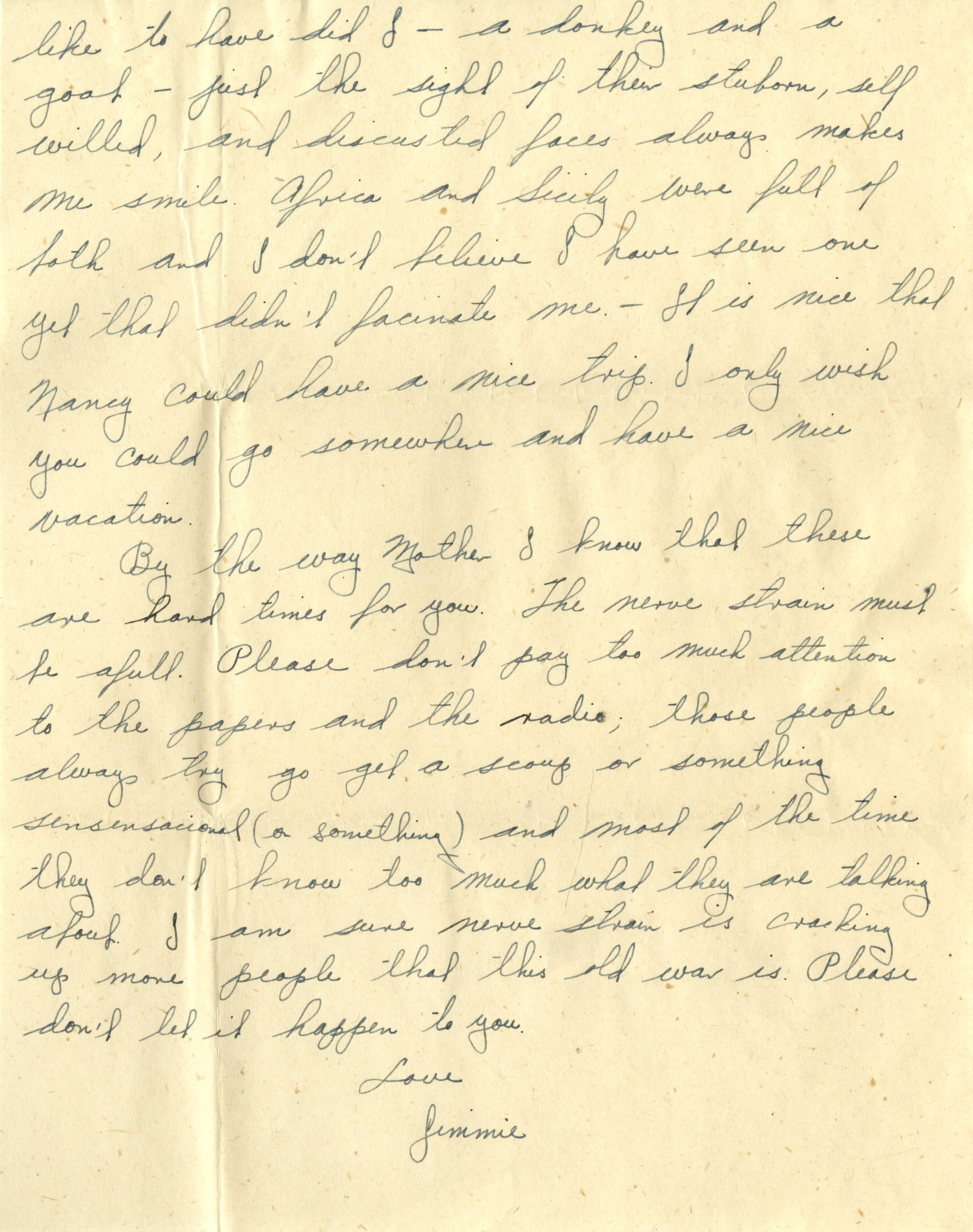 In this letter, written home on 14 May 1944, just a little more than two weeks before the invasion, Monteith explains that he can’t always write as often as he might like: “Old Uncle Sam has a way of taking up a fellows time. However we are old soldiers now and we can stand a few hardships without too much grief.” He’s 25 years old at the time and he ends the letter by trying to set his mother’s mind at ease by understanding the difficulty of her situation and downplaying his own:

By the way Mother I know that these are hard times for you. The nerve strain must be afull. Please don’t pay too much attention to the papers and the radio, those people always try go get a scoop or something sensational (or something) and most of the time they don’t know too much what they are talking about. I am sure nerve strain is cracking up more people than this old war is. Please don’t let it happen to you. Love Jimmie

But as I mentioned earlier, it would not be surprising to talk about Monteith on this anniversary. But we would do well to remember the others.

On two occasions in January and September 1945, The Techgram, a publication of the university, presented photographs with brief captions of those alumni who had died in service during the war. Without claiming to be complete, The Techgram shows eight others who died on 6 June or shortly thereafter, the result of wounds received during the invasion:

Fourteen others died in France before the end of August 1944:

I’m guessing it doesn’t matter if you first learned about the Normandy invasion from contemporary newsreels, or from watching The Longest Day (1962) or Band of Brothers (2001) or from reading Clayton Knight’s book for kids, We Were There at the Normandy Invasion (1956), or any of the fine books of scholarly history written since. It might not matter whether your experience is burdened by the brutality of war or enraged by the politics of it, it is hard—in simple human terms—to look at these faces and read a simple sentence or two for each one and not get a bit choked up . . . on this 70th anniversary.

3 thoughts on “On the 70th Anniversary of D-Day”