From Then to Now: An Exhibition in Two Parts about April 16th 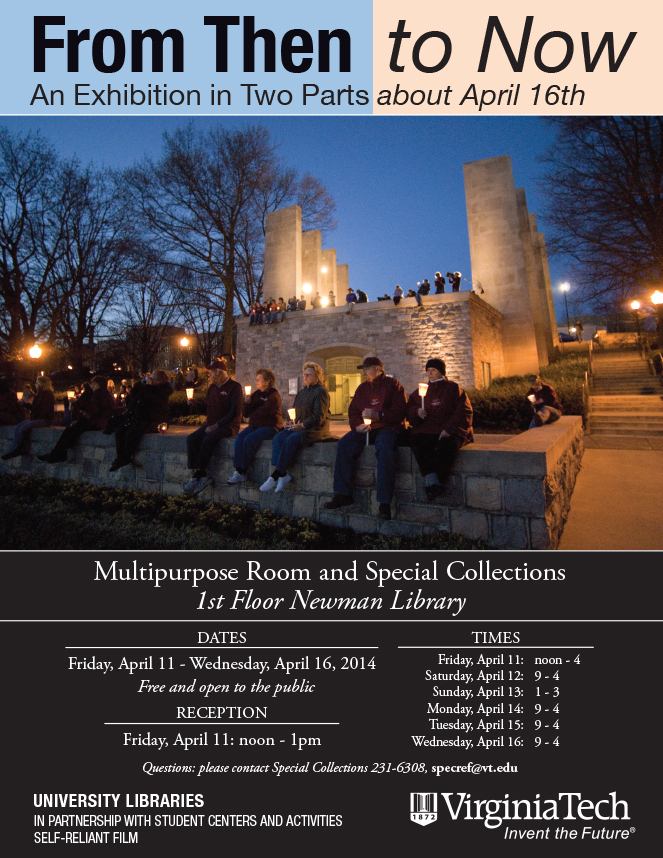 The University Libraries Special Collections, in partnership with Student Centers and Activities and Ashley Maynors Self-Reliant Film, presents, From Then to Now: An Exhibition in Two Parts about April 16th. Part I of the exhibition will be held in the Newman Libraries Multipurpose room where a digital gallery of eight screens will display photos and short films. Three screens in the exhibit contain photos that were sent in after April 16th by community members, faculty and staff. Two screens display photos of the Hokies United memorials, which were created on the Drillfield post 4/16. The two films in the exhibit are by Ashley Maynor and comprise a home movie of the early Drillfield Memorial and footage of Virginia Tech from Maynors film in progress, The Story of the Stuff, which explores how we collectively mourn and memorialize in a time where tragedies are experienced first hand-once removed on the web and television. Part II of the exhibition will be held directly across the hallway from Part I, in the Special Collections room, and include a physical display of condolence items. These items were created by people from all over the world during the months following April 16th. The two parts show how the creative process helped many move towards healing and created a path out of the darkness of grief.

The exhibit was curated by Robin Scully Boucher, art programs director for Student Centers and Activities at Virginia Tech. Ashley Maynor is an award-winning filmmaker and producer. She was named the Sundance Institutes Sheila C. Johnson Creative Producing Fellow. Her most recent film as director is the documentary For Memories Sake. Tamara Kennelly, university archivist, coordinated the processing of the Virginia Tech April 16, 2007 Archives of the University Libraries

Both exhibits are on the first floor of Newman Library up the ramp from the study cafe. There will be an opening reception with food and refreshments on Friday, April 11 from 12 to 1. The exhibition is free and open to the public.

View all posts by uarctk