To day was spent in taking positions and [feeling?] of enemy

it was soon asertained that the enemy were falling back

troops were immediately started in pursuit.

We were rear guard and held the works in front during the after noon and night.“

This was Captain Benjamin M. Pecks entry in his pocket diary on Saturday May 7, 1864. Accessioned earlier this year, Pecks 1864 & 1865 pocket diaries make up one of our newest Civil War collections. Digital scans and transcriptions of each diary are available at VT Special Collections Online. The transcriptions for each entry are transcribed as entered into the diary by Benjamin Peck. All original spelling, punctuation, and grammar are maintained in the line-by-line text found under each image. Brackets and question marks represent areas where the entries are unclear. One prominent example which appears repeatedly in both diaries is, S? This is presumably a nickname for his wife Sarah, but the style and punctuation changes from entry to entry.

Benjamin M Peck was born on October 5, 1838, in Smithfield, Bradford County, Pennsylvania. He married Sarah H. Watkins on April 9, 1863 and after the war the couple would have two children. Their son, Guy W. Peck, was born in 1867, followed by a daughter, Mary A. Peck in 1870. Benjamin entered the legal profession and received his license to practice law before entering the Army. After the war he returned home to Towanda, PA and opened his law office. In 1872 he was elected prothonotary of the local court and served six years. Then, in 1890, he served as President Judge of the 13th Judicial District of Pennsylvania. Benjamin died on September 9, 1899 and is buried at Oak Hill Cemetery in Towanda, PA.

Pecks military service began in August of 1862 when he enlisted in the Union Army as part of Company “B” of the 141st Pennsylvania Volunteers Infantry Regiment as a 1st Sergeant. Early on he helped recruit new members for the regiment. On December 10, 1862 he was promoted to the rank of Full 2nd Lieutenant, and then promoted to Full Captain on December 5, 1863. During the Battle of Chancellorsville Lieutenant Peck was wounded in the neck and shoulder by a cannon shot on May 3, 1863. He returned to his unit, after a two month absence, fully recovered from his injuries and was mustered out of the service on May 28, 1865 in Washington, D.C.

The 1864 leather bound, preprinted diary contains two daily entries per page with cash accounts and notes sections in the back of the diary. In 1864 Benjamin M. Peck was the Captain of Company B in the 141st Regiment PA Volunteers. Due to absences, injuries, and illness of other officers he was placed in command of the regiment before being assigned to lead the 1st United States Sharp Shooters. Brigadier General Byron R. Pierce saw fit to place him in charge of the three companies of sharpshooters and he remained in this position until the end of the war. Peck describes battles, skirmishes, picket lines, commands, and other military assignments and engagements in great detail. He notes the various marches and travel routes of his company and records his travels between the Virginia front and his home in Towanda, PA. As part of the Army of the Potomac, Peck recounts the regiment’s campaign in Virginia and the Siege of Petersburg. He lists his men who were wounded or killed in battle, describes court martial proceedings, and even gives an account of the execution of a Union soldier for desertion. Following the 1864 presidential election he enumerates each candidate’s results within the division, which Lincoln won convincingly.

The 1865 leather bound, preprinted, pocket diary contains one entry per day with cash accounts and notes listed in the back of the book. This diary continues with the 141st PA Volunteers camped outside of Petersburg in their winter quarters and continues through the end of the war and Peck’s return home. He recounts the fall of Petersburg, the Union pursuit of Lee’s Army of Virginia across the state, and Lee’s ultimate surrender at Appomattox Court House. Peck was assigned to preside over several court martial proceedings and gives details regarding these proceedings and punishments, which include a botched execution of a Union soldier. As in the first diary, Peck provides an account of the daily movement of Union troops and supplies. He gives detailed lists of captured soldiers and artillery, as well as Union wounded and casualty records. As the war nears its conclusion Peck was in charge of mustering out soldiers and kept thorough records of the process. In one of his most moving and emotional entries he recounts receiving the news of Presidents Lincoln’s assassination and describes the mood of the men upon hearing the President died. The entries end in July of 1865 with Peck practicing law in his home town of Towanda, PA.

We hope to have a timeline of date and cities Benjamin Peck traveled through during the war available soon at VT Special Collections Online. Until then, if you’d like to learn more about our Civil War collections or any of our other resources please visit us either online or in person! 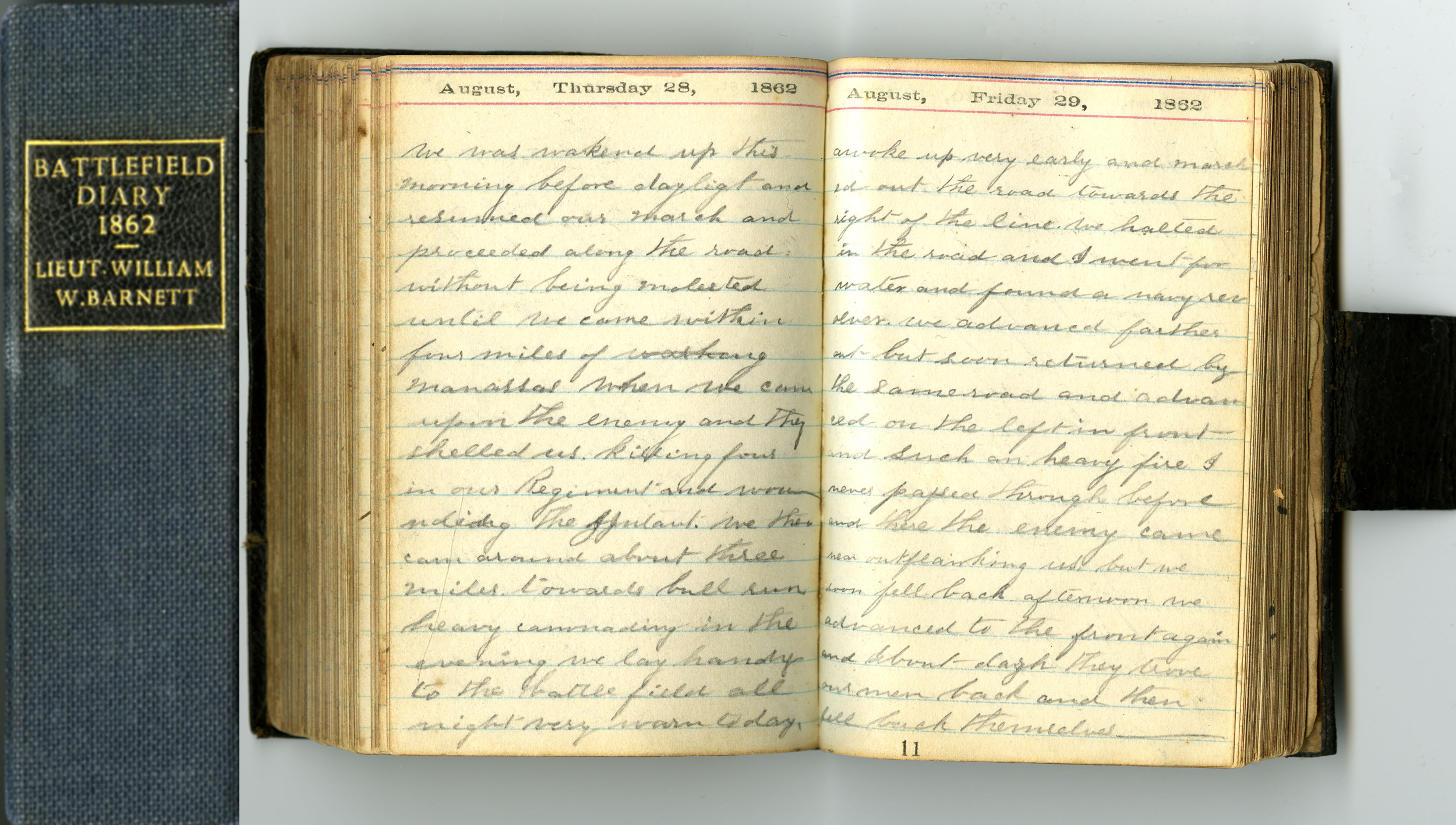