We recently received an Osborne 1 Portable Microcomputer as a donation from Virginia Tech alumnus, Bob Sweeney. We asked him some questions about his background and this computer. Here are his answers:

Q: Tell us a little about your background as it relates to computing in the 1970s-1980s.

A:At the time, I was a technical writer for a software house that developed products for the HP-3000. We were a small company and I could not always get access to a terminal to access theLARC-3000 word processor I used (Los Altos Research Center – chosen because it spelled Larc, as in “Going out on a larc.”). I was an experienced TW, but this job was the first that allowed me to us a WP. Well, allowed is the wrong word. My buddy – Steve White, VT Class of 1962 – was our head of sales. I mentioned to him that I was ready for my manuscript to go to the typing pool. He replied, “Bob, we’re a computer company. You use the computer.” (I never wanted to do it any other way again. I’d spent 2/3rd of my time proofreading!)

Q: What initially attracted you to the Osborne 1?

A:The Osborne 1 ads showed people carrying the machine in elevators, buses, through an airport. At $1600 with a printer and a bundle of software, this was an affordable machine. When I bought the O1, for instance, a business man was buying a comparable machine (same printer, same processor, same drive, same memory) and he paid twice as much for his IBM. By the by, you probably can find one of those ads online. 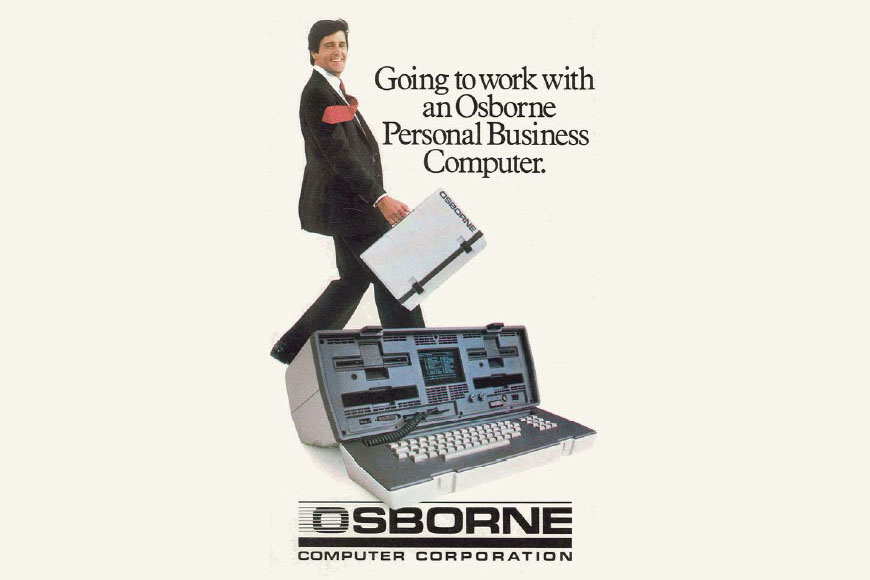 Q: What was your experience with the computer? Did it work as advertised?

A:It was great! I used its WordStar WP to do my stuff at home and prepare files for the HP. (LARC-3000 was an embedded-command WP. For example, like HTML, <b>….</b> for bold, <p>…</p> for paragraphs.) I could encode the files for HP. With a simple application (included) I could conduct work as though the Osborne was a terminal to the HP. Best of all, I could save my files on a floppy, allowing me to work at home, offline!

I loved the Epson printer, too. In fact, I had trouble reloading the paper one day. I got out the manual and was surprised to find no loading instructions! In frustration, I tried again. The path was so simple, if you just stuck the paper in, it would load properly! I’d thought too hard about it!

Q: The computer was advertised as portable, did you transport it from place to place like one would with a modern laptop?

A:Yes, I carried it from home to work and back. But best of all, we were working on a proposal with a customer in Boston. We took the Osborne up with us on the plane and that night updated the propsal!

Q:What was your favorite thing about this computer?

A:That flexibility. WordStar was easy to use. There was also Basic and VisiCal, although I used neither much. We did do several proposals and business plans using the Visicalc and its links to WordStar (A mail merge function). (If I remember, VisiCalc was the first spreadsheet for microcomputers. We could probably dump it into LARC-3000, too.)

Q:What was your least favorite thing?

A:As you’ve seen, the screen is small! I got a magnifier for the screen, but my nephew – with good eyes – threw it away!

Q:Why did you decide to find a home for the computer rather than recycling it as many would do?

A:It has no value, so I just couldn’t send it off to some beach in India. It was my first and started me out on a career of the future. I still marvel at how any writer did it in the old days! You spent twice as much – possibly three times as much – of your days proofing than writing. (Of course, we also had to learn a new skill – usually from several hard experiences – backing up.

A:Not as famous as the Apple, but the Osborne 1 was an important step for businesses in the computer revolution. They would be better known if they’d developed an IBM clone. They did have a machine with a larger screen, but it was still CP/M.

When looking at history, we often ascribe specific importance to that which is first. For example, in 1911 Roald Amundsen from Norway was the first person to reach the South Pole and in 1926 he was recognized as the first person to reach the North Pole. Regardless of the objective truth of these claims (whether indigenous people reached the North Pole before him) he is granted a certain cachet by being recognized as the first. You can find an entire list of similar firsts on Biography Online‘s site.

After human computers came large room-sized machines such as the Harvard Mark 1 in 1944.

As the world of computer technology progressed through the later half of the 1940s and through the 1950s and 1960s, improvements to computer technology were developed and introduced. Punch card input gave way to keyboard input. Components got smaller, leading to “microcomputers” which are just computers that are small. The term generally refers to computers smaller than room sized. Screens were added. Networking via phone lines was added. New and exciting programming languages were created.

As the 1970s progressed, we saw the introduction of the first personal computers (meaning small machines that were within the grasp of an individual to own/operate) from companies such as IBM, with the IBM 5150 Personal Computer being released in 1981. The 5150 followed a great deal of work by IBM in developing a commercial personal computer. Their main competitor was Xerox who introduced the Xerox PARC Alto (a computer that we would recognize today – with a monitor, mouse, and keyboard) in 1974.

In 1976, Apple released the Apple I and then followed with the Apple II in 1977. That year, Tandy Radio Shack (TRS) released their TRS-80, Atari released their computer gaming console, and Commodore entered the market with the PET. Computers were entering the public consciousness and it wasn’t unheard of for people to have a computer at home. It was also becoming much more commonplace to have one at work. During this time, the subject of portable computers was a hot topic and there were entrants to the space as early as 1973 (HP-9830A). Still, an affordable, easily portable personal computer was something that remained mostly a dream until the Osborne 1 was announced in 1981.

The Osborne 1 was billed as revolutionary, hence the ad featuring the Mujahadeen. It was the first really portable computer. It weighed 24 pounds and came in a case designed to absorb the inevitable knocks it would receive being transported from place to place. It was the first product of the Osborne Computer Corporation, named for its founder Adam Osborne, and known for lending its name to the Osborne Effect – a company going out of business by announcing a new product too soon and killing sales of their current product. Despite its demise in 1985, the Osborne Computer Corporation succeeded in producing a viable portable computer

The corporation had effective marketing and certainly grabbed the attention of the computer-savvy business professional of the early 1980s.

And, Interface Age magazine whose tag line was “published for the home computerist” named it an “outstanding buy” in November of 1981.

Our Osborne 1 is the first of what we hope will be many classic computers housed in Special Collections and available for the public to interact with. If you want to see this piece of computing history, stop by Special Collections in Newman Library anytime Monday-Friday 8:00 AM-5:00 PM.