June is Lesbian, Gay, Bisexual, and Transgender Pride Month in the United States. It is a separate observance from Lesbian, Gay, Bisexual, and Transgender History Month which takes place in October. LGBT Pride Month (or LGBTQ+ Pride Month, or LGBTTIQQ2SA, or whatever umbrella term you are comfortable with) was created in response to the 1969 Stonewall Riots in New York City which followed a police raid on the Stonewall Inn, a gay club in Greenwich Village. It is now 49 years since the Stonewall Riots, and 59 years since the Cooper’s Donuts Riots in Los Angeles, and Pride Month has become a worldwide phenomenon celebrating the spectrum of sexualities and genders encompassed within the umbrella of LGBTQ+. But, there are still instances of bullyingand violence against this community. Just last year, during Pride Month, a mass shooting happened at the Pulse nightclub in Orlando, Florida. 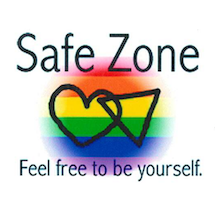 The Safe Zone program at Virginia Tech was established in 1998 in an effort to create a more welcoming environment for members of the LGBTQ+ community. We recently finished processing the HokiePRIDE Records (RG 31/14/15) which include some early documents related to the Safe Zone program defining what or who a Safe Zone is. Listen to David Hernandez talk about the definition of a Safe Zone in his 2014 oral history from The Virginia Tech LGBTQ Oral History Collection (Ms2015-007).

Over time, the Safe Zone program has evolved. It was initially guided by the direction of members of the Lesbian, Gay, Bisexual, and Transgender Alliance (LGBTA) of Virginia Tech (later known as HokiePRIDE). Later, it fell under the direction of the Department of Student Affairs and the Multicultural Center. Most recently, it has been run through the LGBTQ+ Resource Center. Safe Zone has been a part of Virginia Tech for the last 20 years!

Society has advanced significantly regarding acceptance of the LGBTQ+ community and so has Virginia Tech. Still, educating people on campus about LGBTQ+ issues remains important and the Safe Zone program remains a vital way for members of the community to identify people who are supportive and have a basic training on issues affecting the community.

I hope you enjoyed learning a little about the Safe Zone program at Virginia Tech. If you want to see more of the materials from the HokiePRIDE records (RG 31/14/15), stop by Special Collections and have a look!

If you have materials related to the history of the Safe Zone program at Virginia Tech, HokiePRIDE, or LGBTQ+ history at Virginia Tech and are interested in donating to Special Collections, please contact us using the link at top of this page.

View all posts by roganwright