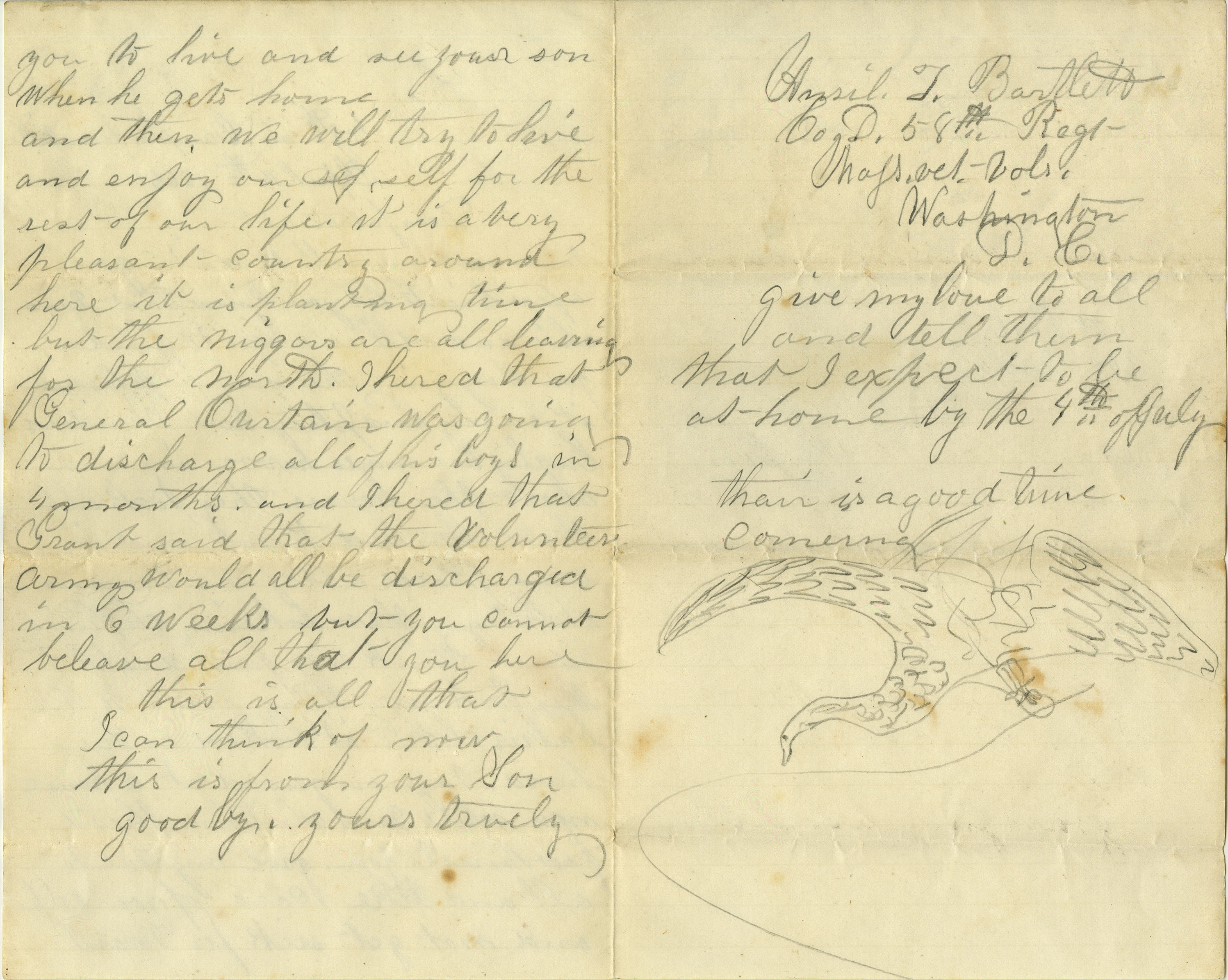 In April 1865, a young man named Ansil T. Bartlett was in Farmville, Virginia (or, as he put it, Farmsville). From what we know, Bartlett enlisted withCompany D of the 58th Regiment, Massachusetts Infantry in early 1864. Although he spent less than 18 months in service during the war, his regiment was involved in action at Spottsylvania, Cold Harbor, and the fall of Petersburg, among other places. On April 15, 1865, he wrote a letter home to his father.

58thin camp at Farmsville
April 15th 1865
Dear Father
I now seat myself to write you a few lines top let you know that I am alive and well and hope to find you enjoying the same pleasure it is a very hard place here. Sheridan’s Cavalry has made havoc in and about the houses. they took all that they had to eat and in some places all of the women’s clothing. that taking clothing I don’t think was just right they took everything even to the babies clothes. it looked rather hard. I am on guard at a house now while I am writing these few lines to you. give my love to all and take care of yourself and not get sick for I wantyou to live and see your son when he gets home and then we will try to live and enjoy our self for the rest of our life. it is a very pleasant country around here it is planting time but the niggers are all leaving for the north. I heard that General Curtain was giving no discharge all of his boys in 4 months. and I heard that Grant said that the volunteers army would all be discharged in 6 weeks but you cannot believe all that you hear this is all that I can think of now this is from your son good bye yours truly

Ansil T Bartlett
Co D 58thRegt Mass. Vet. Vols
Washington
DC
give my love to all and tell them that I expect to be at home by the 4thof July there is a good time coming

Written only days after Lee’s surrender, Bartlett cautions his father against believing any rumors about when he might be discharged, though his own post script suggests he thought 2 months wasn’t unreasonable. His letter is not uncommon in many senses: he reports on his current activities, recounts what he has witnessed around him recently, and looks forward to a life after the war. (Bartlett was actually discharged in late July of 1865.)

What really struck me about this letter the first time I saw it, though, was what came at the end–Bartlett’s drawing of a bird. 152 years later, we don’t have any clue as to why he drew it or what it symbolized to him. He doesn’t comment on it and it looks almost like an afterthought, tacked on to the close of his letter. But, it’s also write on the heels of his final reminder: “there is a good time coming.” Perhaps it was a reminder of that, and an image that represents a good future. Perhaps is meant to be an eagle, a bird used by many regiments on their flags and, at the time, at least part of the country. Perhaps it meant something specific to his father. Or maybe it’s just something he drew to fill the space at the close of his note. Whatever the case, it certainly makes Bartlett’s letter something unique.

The finding aid for this collection is available online. In addition, it has been digitized. You can see these two pages, as well as the third (which includes an addresses and some calculations) online.

One thought on “Ansil T. Bartlett & A Bird”