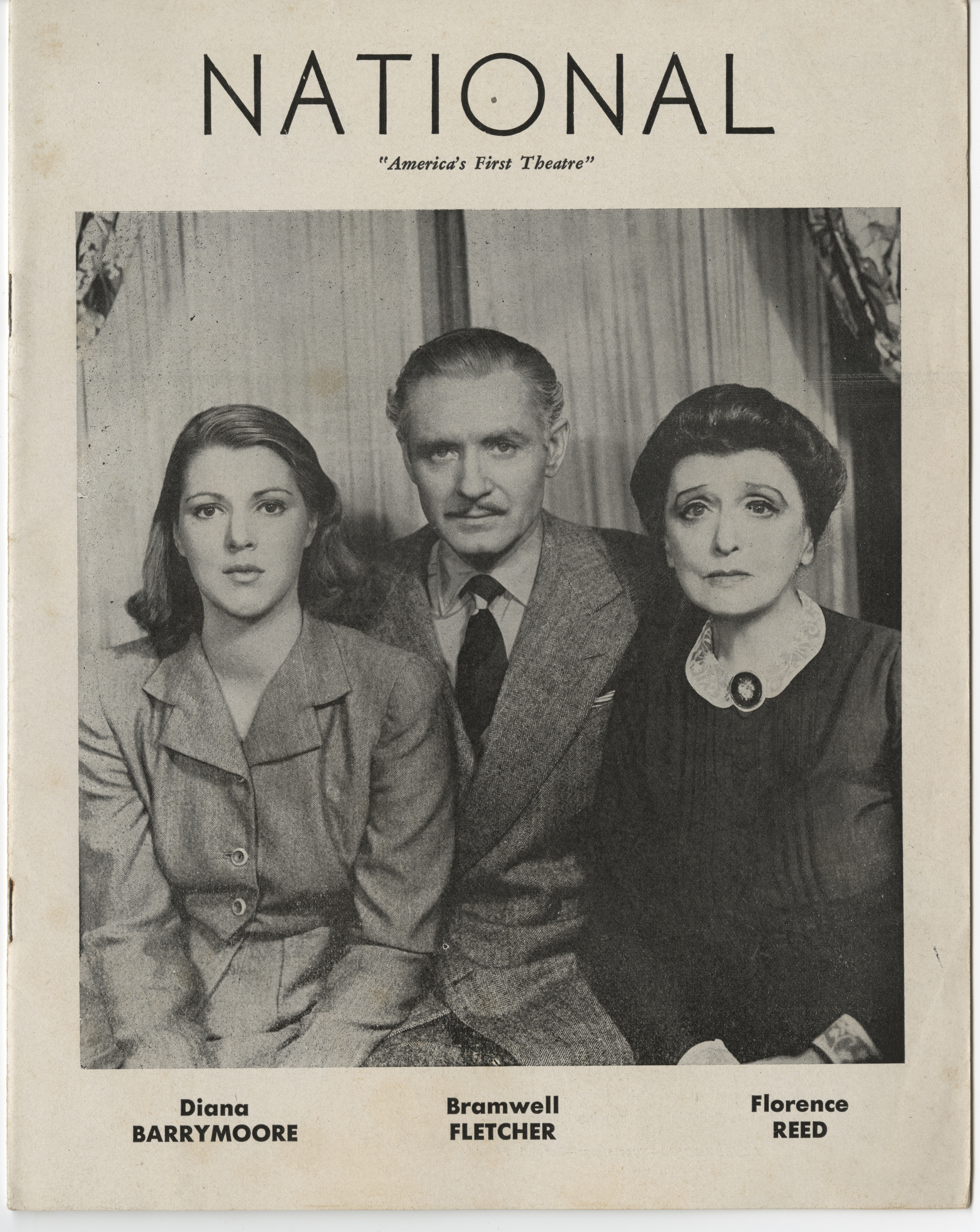 Who’s who in the cast

Over the past few months, I’ve been processing a collection of performing arts programs, advertisements, and clippings gathered by Virginia English teacher John Barnes (1905-1979). Barnes held both a Bachelor of Philosophy and a Master of Education and taught English at Lane High School in Charlottesville, VA from 1949-1958 when he became Guidance Director.

Over the years, Mr. Barnes collected numerous newspaper clippings and articles focused on the theatre and entertainment industries beginning in the late 1800s. He also gathered an impressive collection of playbills and programs from around the world for various mediums including plays, musicals, movies, orchestral performance, opera, ice skating, circus, and more. The playbills and programs are from the 1900s through the 1980s with the majority from 1940-1960. There are bills from small local theatres and from national playhouses. Given my interest in the theatrical arts, I had a blast working with this collection!

There are simply too many amazing things in this collection for me to show them all to you – Broadway and West End playbills, early film programs, circus programs from the Soviet Union, a kabuki program from Japan, cabaret programs from France, and more. Since I can’t show everything in one blog post, I’m going to focus on some playbills that feature American celebrities.

The playbills from the National Theatre (Washington, D.C.)inthe 1940s & 1950s caught my eye because they feature prominent images of the performers and downplay what show they are performing in. Some of the shows don’t even have their title on the cover – and it’s surprising what shows that happens to. I found this interesting since the trend in recent years on Broadway is to focus on the show rather than who the performers are. 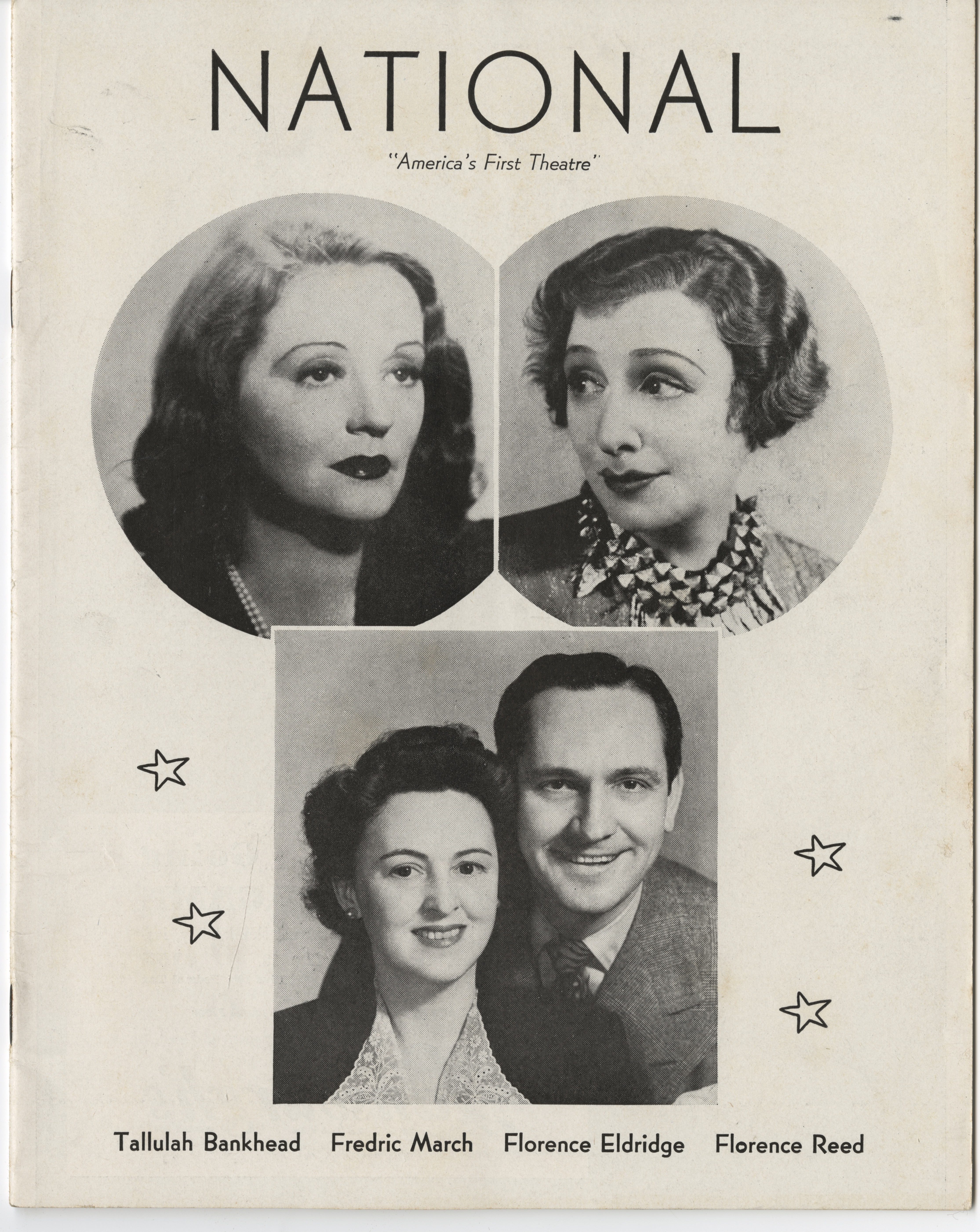 A great example is this playbill from the November 9, 1942 National Theatre opening performance of Thornton Wilder’sThe Skin of Our Teeth. The title of the show appears nowhere on the cover. Instead, there are pictures of Tallulah Bankhead– star of stage and film and well known for the play Little Foxes and the Hitchcock film Lifeboat, Fredric March – Oscar winner for the 1931 film Dr. Jekyll and Mr. Hyde, Florence Eldridge – known for the playLong Day’s Journey into Night, and Florence Reed – a well known stage and screen actress who appeared in silent film and a few talkies, including the role of Miss Havisham in the 1934filmGreat Expectations. 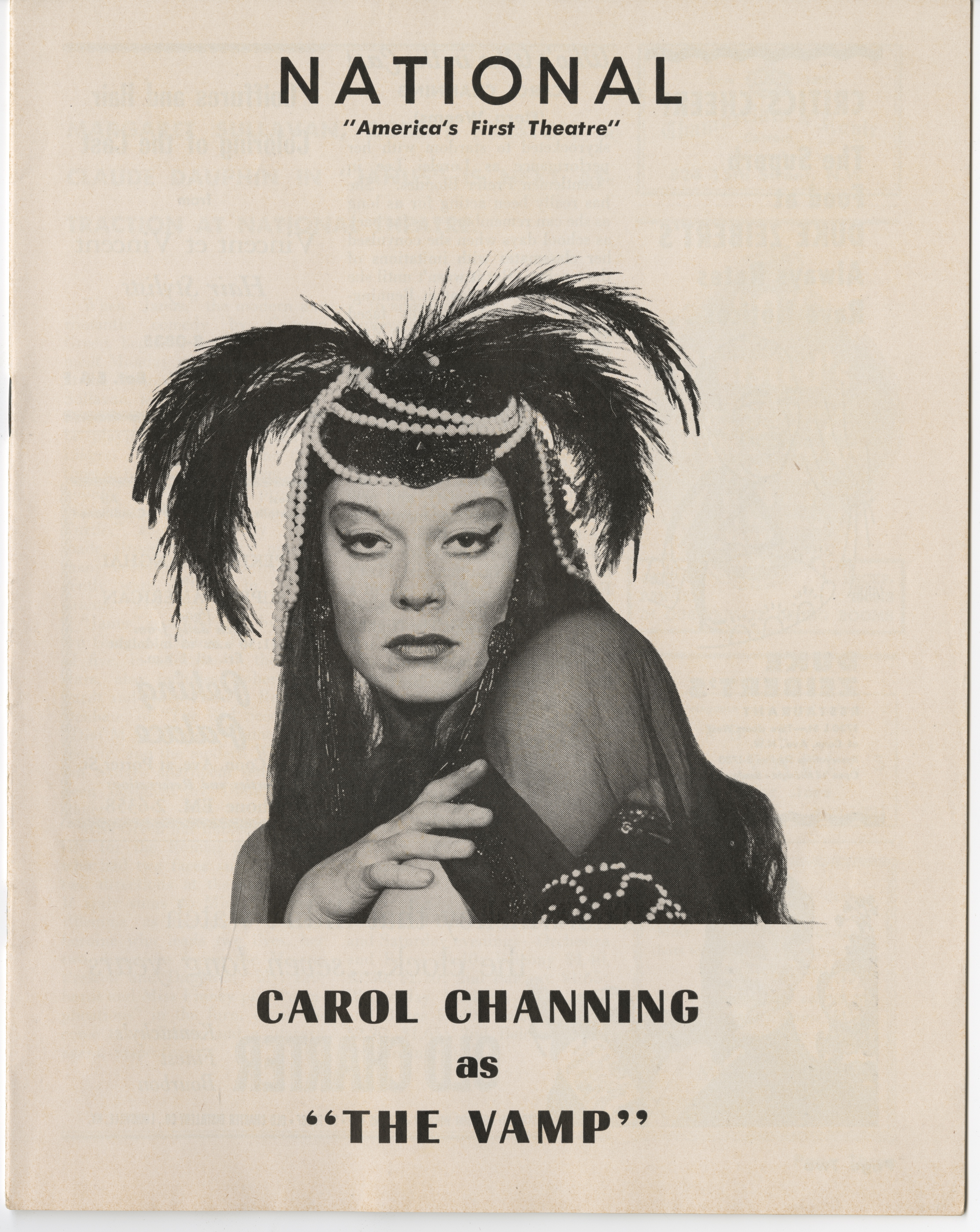 Even when the show title is included, the trend is to feature the performer. This example is the cover of the playbill for the October 31, 1955 performance of the musical The Vamp which starred Carol Channing – wildly well know for her roles in Gentlemen Prefer Blondes and Hello, Dolly!.

I would speculate that featuring the performers was done to increase ticket sales – a typically effective strategy. These performances were also occurring during World War II and the period immediately following. I imagine celebrity was as much a distraction then as it often is today.

This playbill again only mentions the performers on the front. For me, this is the crown jewel of the National Theatre playbills in this collection. Despite misspelling her last name on the cover, this playbill jumped out at me because of the familial resemblance Diana Barrymore bears to her niece Drew Barrymore. That made me pick this up … then I saw what it was and I was even more excited. 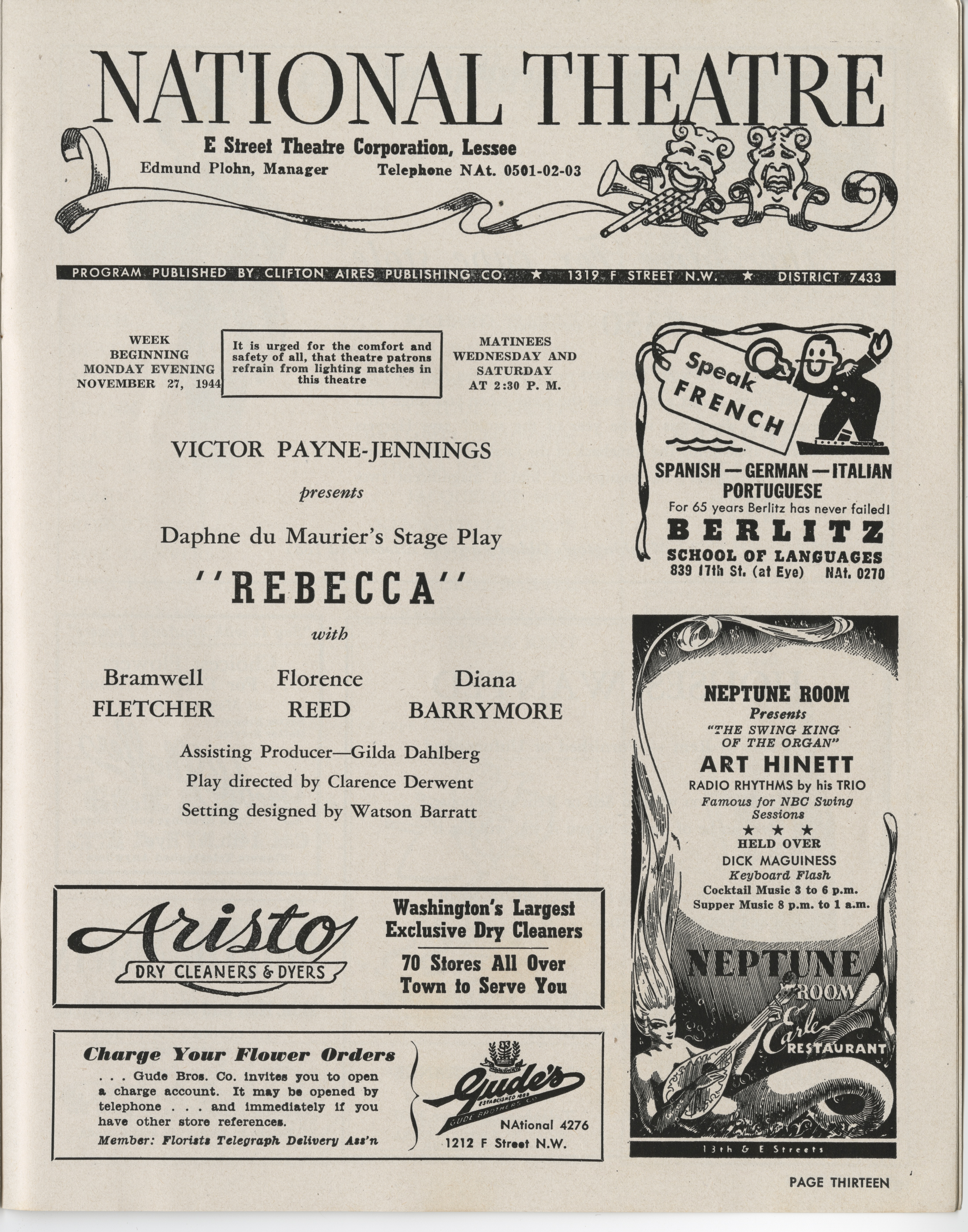 This playbill is from the November 27, 1944 performance of Daphne du Maurier’s Rebecca. The cast and show both are amazing! The show is based on the classic novel of the same name by the same author. It includes one of the “Best opening lines in literature, ever” according to Marie Claire UK(“Last night I dreamt I went toManderley again.”). It also has one of the creepiest and most menacing female antagonists: Mrs. Danvers.

This production mixed celebrity with the play’s compelling story and this playbill hints at the cultural drama embodied in the production. Diana Barrymore was acting royalty, coming from a family well-known in the industry. She was married to Bramwell Fletcher (known for The Mummy with Boris Karloff) – who was significantly older (18 years) – and in this show, they play husband and wife.

In addition topairing this celebrity couple on stage to entice the audience, Florence Reed portrayed Mrs. Danvers! As I mentioned before, Reed was well known for her role as Miss Havisham in Great Expectations. Given the celebrity involved in this production, I’d be interested to see what the tabloids were printing about it.I also think it would have been an effective diversion for Washington theatregoers looking to escape the realities of World War II America.

These few glimpses merely scratch the surface of what John Barnes collected. The finding aid is not yet online, so I can’t share it here, but the collection has been organized and is available for use. Just visit the Special Collections reading room and ask for the John Barnes Performing Arts Collection, Ms2016-005. If you have any interest in the performing arts or historic print advertising, you’ll be glad you did.